For the mob, see Scarlet Knight. 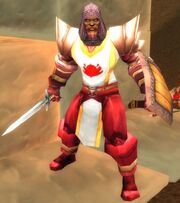 The shields of the former knights of the Holy Light once glowed white. As they turned to the Scarlet Crusade, the light of their shields turned blood red.[7] Bestor is a known knight of the Crusade.

Knighthood in the Scarlet Crusade was still considered a position of prestige, as initiates had to face rigorous trials in Stratholme in front of Grand Crusader Saidan Dathrohan himself. Failure in undergoing the rites however ended up in immediate execution, as the siblings Jarien and Sothos harshly discovered.[8]

Known knights are High Commander Goodchilde and the Scarlet Knights.