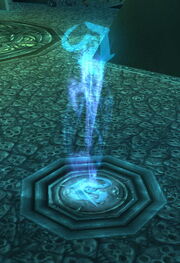 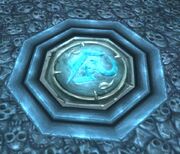 The Scourge Transporters are fixed devices found throughout Icecrown Citadel to allow the Lich King and and his minions to quickly travel around the frozen throne. After defeating certain bosses within, they become available to use by the players for the same purpose.

To use, simply right-click the transporter and choose the location you wish to travel to:

The transporter glimmers with a crystalline light.

Light's Hammer - This station is at the beginning of the instance.

Rampart of Skulls - This station opens up after you defeat Lady Deathwhisper.

Deathbringer's Rise - This station opens up after your faction wins the Gunship Battle.

Upper Spire - This station opens up after entering the Spire.

These are updated forms of the Ulduar Teleporters, in which it does not give you the option to transport to the same location which you currently stand. It also does more than move you to another location, it encases the player in a block of ice for transport.