Scout Captain Elsia is a blood elf ranger, and a prominent commander of the Sunreavers.

Elsia was located at Sunreaver's Command, the Sunreaver base camp nestled in northern Crystalsong Forest. She was presumably its leader, though the camp saw little action.

Elsia joined the Sunreaver Onslaught following the Purge of Dalaran. She is now located at the Sunreaver base near the Shado-Pan Garrison, and accompanies members of the Horde to Regent Lord Lor'themar Theron's destroyer, the Crimson Treader, on the Isle of Thunder.

Elsia aids heroes of the Horde throughout the various assaults on the Thunder King's stronghold such as The Assault on Zeb'tula and Tear Down This Wall!. After the latter she is found at Conqueror's Terrace or the Beast Pens along with Magister Edien Sunhollow sending adventurers to eliminate Zandalari enemies. During To the Skies! Elsia provides information about the mission.

After a Horde adventurer and Taoshi secured Stormsea Landing, Elsia led her rangers to the newly-opened location.

She joins an attack with Lor'themar and Aethas on Shan Bu at Bloodied Crossing. She is ultimately present at the reckoning between the regent lord and Jaina Proudmoore, though is ordered to stand down. Like Vereesa, she is enraged by the two leaders agreeing to stand down, but ultimately obeys. 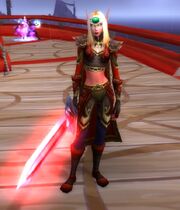 Scout Captain Elsia at the Isle of Thunder.

There is no time to waste. The Alliance move on the Isle of Thunder as we speak!

The Kirin Tor can keep Dalaran for all I care. This is where I feel most at home, behind enemy lines, right in the thick of things!