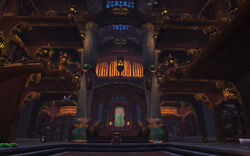 The Scrollkeeper's Sanctum is a giant three-level library, the southern building of the Temple of the Jade Serpent in the Jade Forest.

In the uninstanced version, Lorewalker Stonestep is at the central desk, eight Yu'lon Scribes are behind him at desks of their own, and, alarmingly, Dappled Moths are flying about, while Assistant Scrollkeepers are busy with the shelves.

When the Temple came under fire during the Burning Legion's third invasion of Azeroth, the sanctum was overrun by demons, with Summerpetal, Lorewalker Stonestep and the Yu'lon Scribes taken prisoners by the observer Belphiar and a force of demons. Soon, the Grandmaster of the Order of the Broken Temple made their way through the sanctum, defeating the demons and freeing the scribes, but not quickly enough to prevent Belphiar killing Stonestep. The pandaren's death was quickly avenged as the Grandmaster killed Belphiar, with Summerpetal joining in the counterattack on the courtyard.[1]