Not to be confused with Seeker (guard). 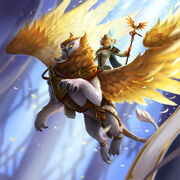 Seekers are feral creatures resembling a cross between an owl and a cat that have been infused with the Light by the titans. They used to be the mounts of the titanic watchers.[1] Though Azeroth was once home to numerous herds, their great numbers were gradually reduced to a mere three specimens after millennia of defending against planetary threats.[2]

The finest specimens of seekers were selected from herds by the Pantheon and trained to serve the watchers, speeding them to sites of corruption in accordance with containment protocols. Invasive corruptive entities have bombarded Azeroth since its shaping. Attrition due to combat fatalities gradually reduced the numbers of Seekers. Now, only three are known to remain, kept within the Primordial Observatory.

During the third invasion of the Burning Legion, Azeroth's world-soul contacted her Speaker, Magni Bronzebeard, to tell him about the Primordial Observatory so that he would find the seekers. One of the three had been touched by the Void, and Magni realized that Azeroth wanted him to find the seekers before the entire vault was overtaken by the Void. He knew, as Azeroth knew, that the High Priest of the Conclave would protect the seekers and use them in service of the Light.[1]

[High Priest's Lightsworn Seeker] is the priest class mount. It is a reward from

[110] The Sunken Vault. Its color-scheme changes depending on the player's specialization.

Seeker mount in Heroes of the Storm.

Seekers appear as mounts with diffrent colorations with a backstory: "In a faraway realm untouched by the Burning Legion, herds of feral Seekers still roam Azeroth's golden plains."