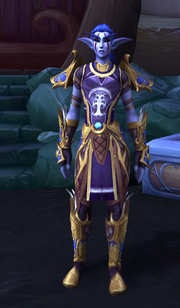 Sentinel Cordressa Briarbow is a night elf quest giver located inside the Temple of the Moon in Darnassus, not far from Tyrande Whisperwind.

Recently being promoted to the rank of captain,[3] Cordressa met with King Anduin Wrynn, who recognized her from Garrosh's trial, and the night elven leadership in Darnassus. Her unit was chosen to protect the Explorers' League in their mission.[2]

Cordressa was part of an Alliance expedition sent to Silithus to study Azerite and survey the Horde forces. The first night they arrived, she befriended the gnome, Sapphronetta Flivvers. After she ate dinner, she and two other Sentinels left the camp to collect information regarding the Horde operations. The same night, in the perspective of Sapphronetta Flivvers, three bodies were seen. She commented that two were of dead Sentinels and the third body was something she "didn't want to look at for fear that panic that was clawing at the back of her brain would swoop to the forefront and shut down her ability to think".[4] The third body was not Cordressa's and she was ultimately able to save Gavvin Stoutarm, Inge Ironfist, and Arwis Blackstone, returning them to Darnassus with their valuable information.[5]

Cordressa escorted High Priestess Tyrande Whisperwind to Stormwind City to discuss the situation with King Anduin Wrynn before returning to Darnassus to be assigned to the night elf expedition to Silithus on the first available ship.[6] Cordressa and the rest of the night elven fleet were en route to Silithus to deter a potential Horde campaign until the night elven druid Teshara sent word of the Horde's invasion of Ashenvale Forest and Malfurion Stormrage's orders to recall the fleet back to Darnassus. The night elf fleet returned just in time to fend off the Horde's incursion in Darkshore. With Malfurion creating a wisp wall defense and the night elf fleet using its artillery to keep the Horde at bay, it seemed as if the night elves could hold the Horde off until Stormwind's reinforcements arrive. However, the Horde dissipated the wisp wall by dividing its attention on multiple fronts and then began besieging the night elf fleet with their arcane enhanced catapults. To make matters worse, Horde infiltrators swam through the sea and commandeered some of the night elf ships. Cordressa fought alongside Shandris Feathermoon as the ships were attacked when the tide of battle turned.[7] When the Horde began to besiege Teldrassil, all hope to safeguard the night elven capital was lost and the remnants of the night elf fleet steered their ships away in retreat.[8]

Cordressa participated in the Battle for Darkshore, running the Hunter's Hall.