The Seven Kingdoms were the human states that became sovereign after the disintegration of the Empire of Arathor, approximately 1,200 years before the First War.[1] 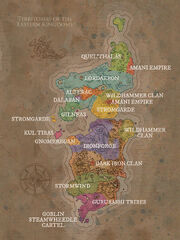 The territories of the Seven Kingdoms (and their neighbors) before the First War.

The seeds of the kingdoms of men were Arathorian city-states. First among them was Strom, a mighty fortress city of the Arathi tribe located in the regions south of Quel'Thalas. This bastion became the capital of the nation of Arathor, which saw its number grew as humans from all over the land traveled there to the protection and safety of Strom.[2]

After the Amani defeat at the end of the Troll Wars and the death of Thoradin, the Arathorian king, the younger generations of Arathor — then an empire — sought to expand beyond the borders of the lands surrounding the capital.[3] Among them, a group of magi journeyed north because they felt fettered by the strict laws governing magic in Strom. On the southern shore of Lordamere Lake, these fledgling spellcasters founded Dalaran,[4] the second Arathorian city-state.[3]

During the following centuries, other city-states arose across the continent. Among them were the militaristic Gilneas and Alterac (both strong supporters of the empire), whose mighty armies explored the mountainous southern lands of Khaz Modan and made first contact with the dwarves. On an island south of the imperial capital, Kul Tiras was built and developed a prosperous economy based fishing, shipping, and commerce. Meanwhile, Dalaran became the chief center of learning for magicians throughout the land. Although the four city-states had their own customs and commercial workings, they all held to the unifying authority of Strom, which acted as the central hub of the expansive empire.[1]

As the economy of Arathor flourished, its strongest elements began to disintegrate. The nobles of Strom, seeking lusher lands, purity, and enlightenment, decided to leave the arid surroundings of the imperial capital against the arguments of the royalty. Far to the north of Dalaran, the greater citizenry founded a city-state named Lordaeron after the surrounding region,[5] which became a mecca for religious travelers and all those who sought inner peace and security.[1]

Left within the crumbling walls of ancient Strom, the Arathi descendants decided to travel south past the rocky Khaz Modan. After many long seasons of journey, they settled in the northern region of the continent they would name Azeroth and founded the kingdom of Stormwind, which quickly became a self-sufficient power in its own right.[1]

Meanwhile, in the almost silent Strom, the few warriors still left decided to remain and guard the ancient walls of their city. As Strom was no longer the center of the empire, the soldiers developed it into a new martial nation known as Stromgarde. Though each of the seven city-states became prosperous in its own right, the empire of Arathor had effectively disintegrated. As each nation developed its own customs and beliefs, they became increasingly segregated from one another and humanity lost the unity achieved during the rule of King Thoradin.[1]

Before the Second War began, King Terenas Menethil II of Lordaeron formed a council of delegates from each of the seven kingdoms, after which the Alliance of Lordaeron was founded.[6]

Demonym is a term for the residents of a locality and is usually, though not always, derived from the name of a locality.

The demonyms for the Seven Kingdoms' residents are:

As of the events of Battle for Azeroth, the Kingdom of Lordaeron remains destroyed[11], with its lands largely divided between the Forsaken, the Argent Crusade and the Scourge. Stormwind maintains its position as the beacon of humanity and the Alliance, also the home of High King Anduin Wrynn. Dalaran City is magically flying above the earth, moved above the Broken Isles, under the leadership of Archmage Khadgar as Jaina Proudmoore stepped down after the Council of Six allowed entrance to Horde into the city after they were expelled in the Purge of Dalaran. The actual lands of the magocracy of Dalaran near Lordamere Lake, however are contested between remaining Dalaranian forces and the Forsaken. The Admiralty of Kul Tiras has once again rejoined the Alliance under the leadership of Lord Admiral Jaina Proudmoore and her family. As of the Fourth War, Danath Trollbane has regained control of Stromgarde Keep and its surrounding towns, finally leading the Kingdom of Stromgarde into the Alliance once again. Gilneas rejoined the Alliance as a nation after the Cataclysm, however the lands of the kingdom remain mostly desolated due to the blight employed by the Forsaken during their invasion.[12] The Kingdom of Alterac continues its existence mostly in the form of the Syndicate, though Alterac Valley is contested between the Frostwolf clan and the Stormpike Guard.