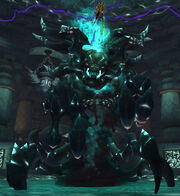 The Sha of Despair into the Temple of the Red Crane

The Sha of Despair is one of seven prime sha of Pandaria.

Emperor Shaohao, free of doubt, chased after his friend the Monkey King into the Krasarang Wilds, but in his haste stumbled into the swamps of the untamed land. Shaohao struggled to free himself as he sank further into the swamp which caused him to worry and the more he worried the further he sank. Those worries took form into the Sha of Despair. High above, the red crane of hope soared, asking Shaohao why he struggled so much. Shaohao looked to the land for answers and noticed a great tree growing in the swamp he was in. He used the great roots as support and with hope in his heart freed himself from despair's grasp.

The Sha of Despair is believed to have escaped from its bindings in the Temple of the Red Crane, and stifling gloom has begun to blanket the land of the Krasarang Wilds in its path. Thanks to the efforts of Anduin Wrynn and champions of the Horde and the Alliance, the Sha of Despair was defeated.