The Shade of Akama is the dark portion of Akama's soul that binds Akama to Illidan's service. The shade was a reflection of all of the wickedness and evil that resided within Akama's soul: his egoism, vanity, and the lust and greed for power and glory that shadowed his outer piety. Looking upon the shade, Akama knew that it was, in many ways, his true face, and the broken felt incomplete, weaker without the darker virtues the shade also embodied: Akama's power, pride, and ambition.[2] It admires Illidan's singular vision and wants to annihilate all of its enemies, perhaps even Akama himself in time.[3] The threat of the shade kept Akama in line. At Illidan's whim, the shade could be unleashed and devour Akama from within, binding him to Illidan's will. Through Akama's spiritual ties to his Ashtongue tribe, it would be able to bind them to Illidan as well. Therefore, Akama followed Illidan's orders not only for his own sake but also to keep his people safe.[4]

If the player demon hunter chooses Kayn Sunfury as their second-in-command, when Akama refuses to rejoin the Illidari to fight the Burning Legion's third invasion the Shade of Akama is recreated and joins in his place.[1] He tells the demon hunter that he has the information from Illidan that his body knows and looks forward of fighting alongside them in the war against the Legion.

During the battle in Niskara, Kayn Sunfury tells him to stay aboard the Fel Hammer and assist whenever means necessary. When they arrive at the fel barrier where Caria and Varedis await them, Kayn orders shade to use the Fel Hammer to open the way for them.

In time the Illidari, together with the Horde, Alliance, and the Army of the Light, were able to defeat the Burning Legion. The fate of the Shade of Akama following this is unknown, but as Akama was last seen attending the The Brawlpub Trial and The Brawl'gar Trial with no qualms, it is possible that the shade was once more united with Akama. 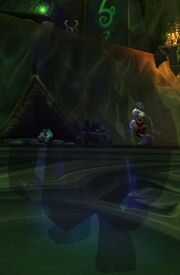 Shade of Akama on the Fel Hammer.