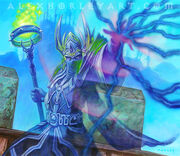 Shade of Arugal in the TCG.

The Shade of Arugal is an undead located at Shadowfang Tower on Bloodmoon Isle off the coast of the Grizzly Hills.

Archmage Arugal was a former member of the Kirin Tor who summoned the worgen into Azeroth. After the worgen laid waste to the fortress of Baron Silverlaine, Arugal adopted them as his children and moved into the keep, which served as his sanctum until he was killed by adventurers at the behest of the Forsaken. It appears that his activities in Silverpine have reached the attention of the Lich King who, with the help of his San'layn servants Theraldis, Keleseth, Atherann, and Valanar, have resurrected Arugal in his service.

Arugal is surrounded by a large number of cultists and Worgen. They can be pulled separately, however. The fight with the Shade has 4 phases (an impressive number for a non-instanced boss).

The opening phase is very simple with Arugal only casting Shadow Bolt. At around 75% health Phase 2 begins.

Arugal uses Phase Out and summons 3 Bloodmoon Servants. After these are killed and the shield wears off, he returns to casting Shadow Bolt. At 50% he commences Phase 3.

Again, Arugal uses Phase Out, however, not being a one-trick-pony, instead of more adds, he uses Worgen's Command on one of your party members. DPS the minion down to 35% health quickly, and then heal the person once they're in their right mind again. He will continue using Shadow Bolt again. 25% marks the start of Phase 4.

Arugal decides to Phase Out again, but summons 9 Servants this time. If you have good AoE, this should not be a problem. Sasha also finally makes good on her word to help out, joining you to help finish him off. Congratulations, you've silenced Arugal for good.

If you have any ranged DPS in the group who are able to fly, have them stand on the parapets along the tower and just DPS the shade to death. The shade's summons and the regular guys on guard won't be able to hit due to their melee range, but the shade casts shadow bolts and won't go into auto-evade mode. Keep anyone who can't help from the parapets away from the top floor room if you try this way.