"Your pain is my pleasure." —Omedus the Punisher[1]

Shadow Word: Pain is a level 2 priest damage over time ability with a direct damage component. 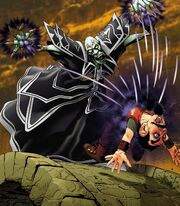 In the World of Warcraft Trading Card Game.

Shadow priests use Shadow Word: Pain (commonly abbreviated as SW:P) as one of their key damage-over-time attacks. Though its damage is considerably low, its primary use is to enable

[Mastery: Shadow Weaving], and it should generally be kept active on enemies at all times. Being both instant cast and free of cost, SW:P is the easiest of Shadow's three DoTs to apply and spread, especially with the talents

[Renew], they instead make use of Shadow Word: Pain as a "reverse HoT" via

[Atonement]. Unlike shadow, discipline does not have any options to directly improve SW:P, but they can talent into

[Purge the Wicked] which replaces SW:P entirely with a stronger DoT.

In PvP, SW:P can be useful for preventing rogues or druids from stealthing, and dealing damage while on the move. Unlike most DoTs, Shadow Word: Pain has an initial direct damage component that will interrupt flag captures and similar processes, making it highly useful for this purpose. This makes SW:P the priest's only instant spammable direct damage ability.

This spell envelopes a target briefly in a cloud of dark energy conjured from the netherworld.[2]