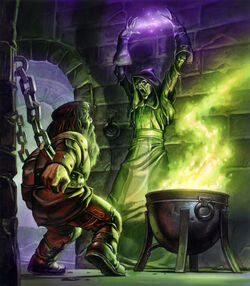 Victims of a shadow priest seldom remember why they're victims.[1]

The Light in which many priests bathe is brilliant and effervescent, granting them immense holy power. But the brightest light casts the darkest shadow—and from within this blackness, a rival power dwells. Shadow priests (or shadowpriests) fully embrace this opposing polarity, their faith equally resolute as their holy counterparts—but focused on shadowy magics and mental manipulation. Like all priests, they dedicate much of their lives to worship—but they derive their power from the Void, straying dangerously close to the domain of the Old Gods. To truly understand such ancient, corruptive influence is to be driven mad. This is the state in which these dark priests thrive, embracing insanity and feeding off of the minds of their opponents to reach terrifying new limits.[3]

During the Burning Legion's third invasion, many shadow priests joined the Conclave in the Netherlight Temple.[4]