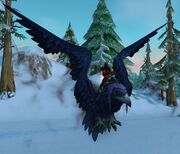 This item is a quest reward from

The preferred vehicle for assassinations, they make no sounds when flying - really great for sneaking up on people.

When the demon hunters joins the forces of Azeroth, the demons knew that they could no longer simply hide among the populace. To combat their new allies, the demons started sending in homunculi. These undead creatures are very life like and well preserved, only one with keen eyes would notice the difference.

In present day, Lilian Voss noticed something strange in the Hall of Shadows. A night elf named Tearir caught her eye. Figuring out his true form, Lilian took him down. With Kyrai and Master Apothecary Faranell, they investigated the body and found it pouring green liquid with every cut.

Lilian decided to gather intelligence and finds eight targets located around the Alliance and Horde capital. Unable to do this alone, she sends a raven to Apothecary Keever to send the Shadow at once.

The shadows arrives at the sight of the homunculus and Lilian explains what it going on. She tells him that she has plans to kill the remaining homunculi. To do this right and not cause confusion the in Shadow's faction cities, Lilian tells the Shadow to go after the opposing faction's cities.

Their first targets were Ardaan the Solemn inside the Exodar and Tercin Shivenllher in Silvermoon City. They both walk around with a hard hitting golem as their bodyguard. After separating them from their protectors, the targets are killed.

Their second targets were Taylenne Sweetsong in Darnassus and Mistress Matilda in Undercity. Both have organised a party and both of them have invited powerful casters. When the rogues see the targets far away from company, they strike and disappear back in the shadows.

Their third targets were Corin Twinbellows in Ironforge and Kroksy the Impregnable in Thunder Bluff. They both have strong armour and would be hard to kill. However, they both stole their keys and removed their armour, rendering them vulnerable easy targets.

Their final targets were Auctioneer Jaxon in Stormwind and Auctioneer Xifa in Orgrimmar. They were found in the most crowded of places. With a faster strike, they take out their target and run for their lives.

The news of their success reached Jorach Ravenholdt who in return rewarded the Shadow with a new mount.

Unlike other class mounts, this mount does not change colors depending on your spec. Other variants may be purchased upon maxing out each spec's artifact.