Not to be confused with Shadowglen Trolls or Shadowglade.

Shadowglen (or Shadow Glen)[1] is the night elven starting area. It is found in the northeastern part of Teldrassil, which is just north of Starbreeze Village. Like all starting areas, it has class trainers for all night elven classes.

After the Burning of Teldrassil, Shadowglen Keepers fought against the Horde at Lor'danel in Darkshore.

This small twilit glade is bathed in a quiet dusk, and is dominated by the great tree Aldrassil which lies at the center of the clearing. Another notable location is Shadowthread Cave which lies in the region's extreme northwest. The area is ringed by mountains; the only gap is to the south, here the path headed to Dolanaar parts the mountain range. 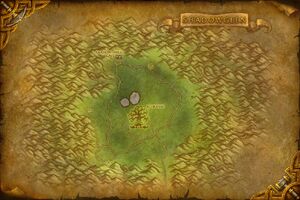 For quests which take place in Shadowglen, see Shadowglen quests.

Before the Cataclysm this starting area was one of the most secure and safest locations in the game up until world flying mounts were added. This was because any Horde players attempting to reach Shadowglen would first have to fight or sneak their way past multiple night elf guards while taking a boat from Auberdine and then running through Rut'theran Village and Darnassus, not to mention that the entrance to Shadowglen itself is a narrow choke point.