The Shadowlands campaign covers the overarching storylines of the expansion World of Warcraft: Shadowlands.

The Maw and Oribos

Through the Shattered Sky

Sylvanas Windrunner has shattered the Helm of Domination, piercing the veil between the mortal realms and the plane of death. Realizing that Sylvanas has also kidnapped several leaders of the Alliance and Horde, the remaining faction leaders call on the adventurer to help the forces of the Argent Crusade to stop the rampaging Scourge, and the Knights of the Ebon Blade to go on a suicide mission to recover the leaders from the Maw and the forces of The Jailer.

Having met up with the kidnapped leaders, and a brief run-in with Sylvanas, but having lost track of Tyrande Whisperwind, the party moves to make their escape from the Maw. As the Jailer's forces closed in, the adventurer touched the Waystone and, for the first time, managed to escape, leaving the leaders behind. The adventurer winds up in Oribos, the eternal city, home to the Arbiter and center of the main realms of the Shadowlands.

The threads of fate 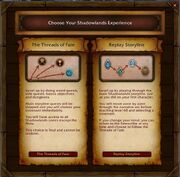 The threads of fate

Main article: The Threads of Fate

Alts of players who have already completed the level-up campaign, earned the

[Choosing Your Purpose] achievement, and completed the first chapter of their covenant campaign will be offered a choice by Fatescribe Roh-Tahl, once they make it out of the Maw and land in Oribos. Players can choose to play through the level-up campaign again, or twist the threads of fate: immediately choose a covenant, start working on renown, and level through world quests/side quests/bonus objectives, and dungeons.

First-time characters (or alts who elected not to twist the threads of fate) will play through a linear storyline, working their way through the four zones.

Unsettled by the adventurer's talk of winged creatures absconding with mortals and throwing them into the Maw, the attendants of Oribos ask the adventurer to travel to Bastion and gather more information. At first glance, an idyllic and peaceful realm, though stuck in its ways, the facade quickly crumbles as an opposing faction, the Forsworn strike out at one of the seven temples.

Finally managing to gain an audience with the Archon, the adventurer is tasked to check on the wards protecting the remaining temples, and having found the Temple of Courage unprotected, heads that direction. The Maldraxxi have obliterated the temple, turning what's left of it into the Necrotic Wake. As the kyrian are about to go to war, the adventurer heads back to Oribos to spread the news.

The adventurer opens the gate to Maldraxxus and immediately themself in the middle of a civil war between the remaining houses of power. A familiar face, Draka, snags the champion from the ambush and heads to the House of the Chosen. Treachery and misdirection are afoot in the seat of military power of the Shadowlands.

Returning to the House of the Chosen after making allies of some of the other houses, the adventurer finds the leader of the house dead. Baron Vyraz, one of the sub-leaders of the house alongside Draka, asks the adventurer, now known as the Maw Walker for having escaped the Maw, to return to find one of the other barons. Checking in with Bolvar Fordragon in Oribos, he hands over an amulet that should help the Maw Walker locate Darion Mograine, who was left behind after the initial assault on the Maw.

The Maw Walker locates Darion, and Ve'nari, a broker who has set up shop in the Maw. The party locates the baron, none other than Darion's father, Alexandros Mograine, the Ashbringer. Turns out Baron Vyraz is a traitor, and sent Alexandros and the Maw Walker to die in an attempt to usurp power. Ve'nari helps the Mograines and the adventurer escape back to Oribos, and the party immediately returns to Maldraxxus to enact revenge on Vyraz. Though Vyraz manages to escape, the Maw Walker gains access to the Seat of the Primus, the missing leader of Maldraxxus.

The Primus left a warning for the Winter Queen of Ardenweald, so the adventurer is tasked to deliver it to her. Home to the Night Fae, Ardenweald is the afterlife of souls tightly bound to Nature, and has keenly felt the effects of the anima drought. In an attempt to consolidate and save as many of the wildseeds as possible, the adventurer helps move a wildseed beset by terrible nightmares to protect it from the Drust.

With the help of some of the Night Fae, the adventurer completes a ritual to delve into the memories of that wildseed. After reliving her origin, her betrayal, and her end, the Maw Walker realizes that the wildseed is that of the Dreamer herself, Ysera. With the help of the Winter Queen, the night fae awaken Ysera. Now that the adventurer has the Winter Queen's attention, they provide her with the Primus's message. Much more anima is needed to hold The Jailer in the Maw, so she asks the Maw Walker to reach out to the venthyr of Revendreth for help.

Revendreth is undergoing a rebellion, as the forces under Prince Renathal are pushing back against those belonging to Sire Denathrius. Nevertheless, Denathrius would be happy to supply anima to Oribos and the other covenants if he wasn't so occupied tamping out the rebellion, so could the Maw Walker deign to assist him in his efforts? Since The Accuser has been such a thorn in Denathrius's side, he tasks the adventurer to capture her Sinstone and turn the Accuser over to the Fearstalker.

Not all is at it appears, as the Accuser shows the Maw Walker a conversation between Denathrius and Lady Inerva Darkvein, revealing Denathrius's actual goal: he has been siphoning anima to the Maw! After escaping Castle Nathria and defeating the Fearstalker, the adventurer sets out to gather allies, reclaim Sinfall, and recover Prince Renathal from the Maw. Renathal gives the Maw Walker their first taste of Torghast, Tower of the Damned to free additional allies, and then what's left of Renathal's forces launch an attack on Denathrius at Castle Nathria.

Having failed to stop Sire Denathrius from leeching untold amounts of Anima to the Maw, Prince Renathal directs the Maw Walker back to Oribos to implore Tal-Inara, the Honored Voice of the Arbiter to action. The adventurer must make a choice: which Covenant will they choose to join?

After making their selection, the Maw Walker is welcomed to their chosen covenant, and a max-level campaign plays out. Each campaign is eight chapters long, and each chapter is gated behind Renown, levels 5, 8, 11, 13, 17, 20, and 22.

The noble kyrian of Bastion face dire circumstances with the impending Forsworn forces threatening to unravel their realm. They will need the Maw Walker's aid if they are to reclaim Bastion and save the Shadowlands.

The ambitious Necrolords face a threat of extinction at their own hand. The Maw Walker's presence will force disparate fragments into an army capable of challenging fate itself.

The groves of Ardenweald are dying. As each great celestial tree falls, the Winter Queen's desperation grows. The Queen and her Court of Night need the Maw Walker's help to restore balance to the forest.

The road to redemption for Revendreth is a long one, and the Dark Prince of Sinfall is ready to walk it. He will need the Maw Walker's aid if he is to wrest control of Revendreth from the clutches of his Master and the loyalists.

The Maw and Torghast

After completing the first chapter of their chosen covenant's campaign, Bolvar Fordragon reaches out to the Maw Walker, asking them to return to the Maw to enter Torghast, Tower of the Damned to start freeing Baine Bloodhoof, Thrall, Jaina Proudmoore, and Anduin Wrynn.

Along the way they will gain access to the Runecarver, who can craft legendary equipment.

Once started, the Torghast campaign will ask the Maw Walker to enter the Torghast wings several times. During the process, the Maw Walker will uncover clues of the captured leaders and rescue Baine, Jaina and Thrall. Eventually, they will be able to enter the twisting corridors and explore it in order to collect clues to find Anduin. During the process, they discovered Sylvanas and the Jailer's plans with Anduin. In the end, however, the Maw Walker can't find the exact location of Anduin, thus can't rescue him.

After defeating Sire Denathrius and discovering Sylvanas's and the Jailer's plans with Anduin in the Twisting Corridors, Bolvar starts a final quest chain where Anduin turns Sylvanas's demand back at her.

The Chains of Domination

Bolvar reaches out to the Maw Walker, apprising them of the attack on Kyrestia the Firstborne at Elysian Hold. The Jailer is on the move, and the covenants plan their counterattack.