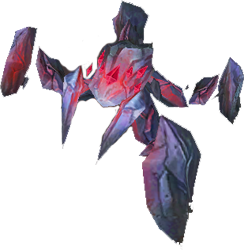 Shale spiders are earth elemental creatures, with four spiderlike legs, that mostly only appear in Deepholm. The elemental shale spider is no true arachnid, but it has durability and ferocity that make it feared even in Deepholm.[1]

Like normal earth elementals, shale spiders are also capable of leaving the earth plane. Some of these creatures have appeared in the Twilight Highlands devouring Elementium, and others in The Jade Forest in Pandaria devour jade. Pandaren miners refer to them as "nibblers."[2]

Through experimentation, the mages of Dalaran have discovered that the powered remains of a crimson shale spider will greatly increase the conflagration of their fire spells.[3] Adult amethyst shale spiders prefer to create their nests against the outer walls of Deepholm.[4] Prized by gem crafters, the undamaged carapace of a topaz hatchling can be used to create stunning inlays for rings and bracelets.[5]

Azergem Crystalbacks are shale spiders found on island expeditions with

[Azerite] coming out their backs.

Shale spiders are tamable by hunters as part of the shale beast family. The family was originally named "shale spiders" but was renamed and expanded to include gyreworms in patch 9.0.1.