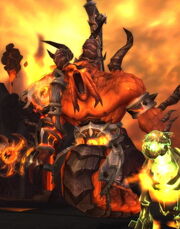 Shannox is a flamewaker boss of the Firelands raid instance.

"The ferocious flamewakers of Firelands are terrifying enough, but Shannox has brought companions to his side in defense of the Firelands. This mighty hunter will require that you find a way to deal with his blazing pets before he burns you to a crisp.[1]

The flamewakers are among the most feared elemental guardians in the Firelands. Shannox is no exception. Serving as the chief hunter and kennel master of Ragnaros's hell hounds, Shannox patrols the elemental realm with his two most ferocious beasts: Riplimb and Rageface.

Shannox is untauntable and uses a standard threat table. He has a 10 minute enrage in all difficulties, but this is likely to happen only on heroic mode (or raids doing

[Bucket List]) since normal mode has Magma Rupture as a soft enrage, which will likely kill your raid before then.

Riplimb is untauntable and uses a standard threat table. In Heroic Difficulty Riplimb cannot be permanently slain while his master lives. When his health reaches zero, he will collapse for 30 seconds, and then reanimate at full health to resume fighting.

Rageface cannot be controlled or tanked, and darts about from enemy to enemy, changing targets periodically.

There are three things to worry about during this fight. Traps, Tank debuff stacks, and raid damage. We will briefly go over each mechanic and how to mitigate it.

When a dog runs over any trap it gains a Wary buff which prevents it from being affected by other traps for 15 seconds from the time the trap was triggered. Riplimb often gains Wary once he completes a spear fetch (because there are tons of immolation traps lying around). Also, a few seconds after Shannox performs Hurl Spear, Riplimb will gain Dogged Determination that prevents him from being immobilized or slowed below a certain percentage of his normal speed (this percentage starts at 65% rises the longer Riplimb is attempting to retrieve and return the spear). This small window is when Riplimb can be kited (preferably into a Crystal Trap) to increase Shannox' spear downtime.

Shannox and Riplimb can be tanked but not taunted. You'll want one tank on each of them and no tank on Rageface. Both Shannox and Riplimb place a stacking debuff on the tanks that must time off to be cleared. Riplimb will place the debuff when he attacks, Shannox will only place his debuff while he holds his spear. Keep Shannox and Riplimb a good 30-50 yards apart, but not more than 60 yard such that they gets separation anxiety.

Shannox will throw his spear to Riplimb. The spear will explode in fire. Riplimb will then pick up the spear and bring it back to Shannox. It is during this "fetch it boy" stage that both tanks can clear their debuffs. Riplimb can be slowed. Shannox can be kited for more time. Riplimb can be kited into a crystal trap but it must be done quickly. If the tank doesn't kite Riplimb into a trap before Riplimb begins his fetch cycle, he becomes immune to traps. It is not required to cleanse the buff every time he throws the spear, but it makes the fight much easier on the healers. Riplimb's tank should remember not to chase Riplimb as he heads back towards Shannox after retrieving the spear, as the time it takes Riplimb to get back to the tank is vital to ensuring his bleed falls off.

If one of these time-eaters is missing or too small, the other factors must be increased (tank Riplimb farther away, kite him away from the spear impact zone).

During this fight your raid will take damage from Rageface. Both placing Immolation traps on him (thus allowing easier stopping of face rage) and placing him in Crystalline traps (not recommended, since he's being DPS'd first, but can break Facerage) will reduce the sporadic raid damage. Shannox cleaves and traps can wipe you if you get hit by them.

However, it is possible to have success with various kill orders.

There have been reports of tanks that can ride each others' aggro so well that they effectively tank swap both Shannox/Riplimb. While this strategy has proven successful for some, it greatly increases the amount of damage taken by the tanks (Dog doesn't have a long "fetch it boy" phase) and complicates an easy fight.

If your raid has issues with tank death once Rageface dies, often due to Immolation traps hitting the tank, it is possible to alter the order slightly. Burn Rageface to about 30%, then move your melee to Shannox and your ranged to Riplimb apart from a couple heavy-hitters, who stay on Rageface to break Face Rage. Arcane mages are a very good option here, with Marksman hunters being a decent backup. Once Riplimb and Rageface are both under 10% and Shannox is close to 30%, both dogs are killed off in quick succession and Shannox is then burned through the remainder of his health.

This allows all healers to move from other targets to the Shannox tank at the same time, simplifying the healing. However, this does increase the risk of deaths to Face Rage if the assigned dps are out of range or otherwise unable to act. Note that the exact percent health Rageface should be left at, as well as which dps go where, depends greatly on both your raid composition and the performance of all dps.

There are two fatal mechanics in this fight for players trying to solo the encounter:

Pop cooldowns on the pull. Both mechanics can be countered by pet classes that can direct their pets to attack Rageface to break the channel and the Crystal Prison should players get trapped by it. Otherwise beating the encounter will require bursting down Shannox before Rageface casts Face Rage, or bursting down Rageface and surviving Shannox's +30% damage/attack speed frenzy. Try to keep Riplimb alive, but crowd-controlled if possible. There's no real difference between normal and heroic mode at this point.

Intro
Yes... I smell them too, Riplimb. Outsiders encroach on the Firelord's private grounds. Find their trail, find them for me, that I may dispense punishment!

Aggro
Aha! The interlopers... Kill them! EAT THEM!

Face Rage
Go for the throat!

Rageface dies
You murderers! Why... why would you kill such a noble animal?!

Riplimb dies
Riplimb! No... no! Oh, you terrible little beasts! HOW COULD YOU?!

Shannox is voiced by Grant George.