Wowpedia
Register
Don't have an account?
Sign In
Advertisement
in: Articles to clean up, Un'Goro Crater subzones, Titan facilities

The Shaper's Terrace is a titan-related area found in Un'Goro Crater on the bluffs above Marshal's Refuge to the east, as well as a similar structure that was revealed on the eastern wall of Un'Goro, when the cloaking device failed during the Cataclysm.

It seems to be related to titan buildings found on Northrend and elsewhere in southern Kalimdor. It is not easily accessible by foot (though it's relatively simple to walk down to Marshal's Refuge from it) and is intended to only be accessed through the Waygate[40, 82] 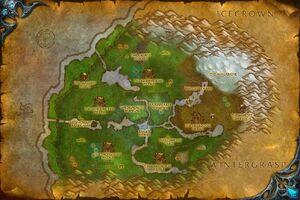 Recently, the terrace has been taken by members of the Cult of the Damned. For the quest

High Cultist Herenn. He is located in the Hall of Repose and possesses the [Omega Rune] necessary to activate the Etymidian.

Currently, it is also the location in which the quest

This area, also known as the Shaper's Terrace, is the location where Khaz'goroth once stood to perform tests and experiments. His apprentice, Nablya, now continues these tests in his absence. She's currently observing the bloodpetals, pterrordax, gorillas, and diemetradons.

Without flying, the terrace can only be reached by being teleported there by the Un'Goro Examinant.