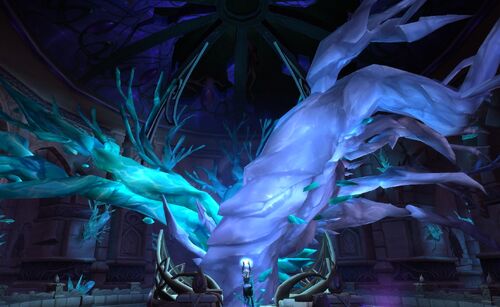 Failed arcan'dor at the Shattered Locus

The Shattered Locus is a chamber of the Temple of Fal'adora in Suramar. It houses a failed arcan'dor and is filled with corrupted dryads known as Shardmaidens.

Many years ago, exiles from Suramar City came to Falanaar. Valewalker Farodin took pity on them and gifted them with an arcan'dor. For a time it sustained them and they were safe, but it did not last forever. The arcan'dor became unstable and died, and in a flash of wild magic the elves were twisted, becoming the fal'dorei. The remains of the arcan'dor are known as the Shattered Locus.[1]