“As you all well know, the path of our people has not been an enviable one. Blood elf and draenei alike have been tested. Conflict and strife have been our constant companions for as long as any of us can remember. For countless years, and across the faces of many worlds, draenei have yearned to better embrace the Light and put an end to darkness. So too have our Scryer brethren held such ambition. At last my noble brothers and sisters, our time is at hand!”

The Shattered Sun Offensive, abbreviated as SSO, is an army of the Scryers and Aldor rallied by the naaru to combat Kael'thas Sunstrider's mad bid to use the Sunwell as a portal to summon his master, Kil'jaeden.[1] Their operations are centered around the Isle of Quel'Danas, where the Sunwell is located. The Offensive is the culmination of a plea for unity between the draenei priests of the Aldor and the blood elf wizards of the Scryers in an effort to prevent Kil'jaeden's summoning.

The Offensive's main base is located on Quel'Danas in an area called Sun's Reach, on the island's northwestern corner. The first efforts of the Offensive are to retake Sun's Reach - first the arcane sanctum, then the armory, then finally the harbor - from the Dawnblade blood elves loyal to Kael'thas, as well as the demonic forces of the Burning Legion who have come at the evil Prince's call. Members of the Offensive will also be called upon to enter the Magisters' Terrace and do battle with the elite of Kael'thas' forces, eventually facing the lord of the blood elves himself in a final showdown. Only the most elite adventurers of Azeroth, however, dare to enter the Sunwell Plateau, where the fruits of Kael'thas' work are most evident - where Kil'jaeden's most loyal servants prepare for their master's arrival on this world...

The Shattered Sun Offensive is a new faction that was added in Patch 2.4.0, with the opening of the Isle of Quel'Danas and its instances. In addition to the NPCs on Quel'Danas, several new questgivers were added in Shattrath City, and the majority of the NPCs around the Terrace of Light are now marked as members of the Offensive, with blood elves mingling with the draenei (prior to 2.4, all of the NPCs around the Terrace were draenei affiliated with the Aldor).

Reputation through Exalted with the Shattered Sun Offensive can be gained via doing specific quests as well as by running the 5-man dungeon Magisters' Terrace.

Additionally, after players retake the Sun's Reach Armory, several other vendors spawn, including Smith Hauthaa, the

See also: Isle of Quel'Danas NPCs for a list of NPCs corresponding to each phase. Quests marked with a † were removed at the end of that phase.

The first building to be reclaimed is the Sun's Reach Sanctum. The daily quests

[70 Daily] The Sanctum Wards† count toward securing this objective. Upon retaking the Sanctum, a Trade Supplies vendor and two additional quest givers will appear, while players may also continue repeating the daily quests, via

Once players have retaken the Sanctum, the next step is recovering the Sun's Reach Armory. The two daily quests directly associated with retaking the Armory are

[70 Daily] The Battle for the Sun's Reach Armory† and

[70 Daily] Distraction at the Dead Scar†. Once the Armory has been retaken, four PvP armor vendors, two questgivers, and the

[25-30 Daily] The Air Strikes Must Continue replace the earlier quests.

While players are working on retaking the Armory, in Shattrath City, Exarch Nasuun is in the process of creating a portal to the Isle of Quel'Danas. Players who complete

[70 Daily] Intercepting the Mana Cells† will aid him in his task. Once the portal has been activated,

[25-30 Daily] Maintaining the Sunwell Portal replaces this quest, and

[25-30 Daily] Know Your Ley Lines is activated in the Sanctum.

Sun's Reach Harbor is the third and final location to be reclaimed, along with the Silvermoon's Pride which is moored there. Quests associated with recapturing the Harbor include

[70 Daily] Intercept the Reinforcements† and

[70 Daily] Taking the Harbor†. Once the Harbor has been retaken,

[25-30 Daily] Keeping the Enemy at Bay may still be completed.

While players are working on retaking the Harbor, work also commences on building a forge and anvil for Smith Hauthaa at the Armory. Players who complete

[70 Daily] Making Ready† will aid her task. Once the forge and anvil have been completed, 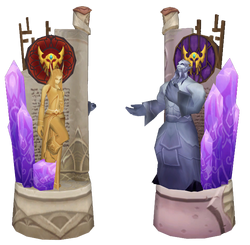 Upon reclaiming Sun's Reach in its entirety, Mar'nah is trying to set up an Alchemy Lab for players, which also allows both her and Shaani to set up shop. Completing the quest

[70 Daily] Discovering Your Roots† advances this objective. Once the Alchemy Lab has been built, the quests

Additionally, the Shattered Sun Offensive will begin to accept donations of gold to construct a statue in honor of the fallen via

[70 Daily] A Charitable Donation† and

[25-30] A Magnanimous Benefactor, the latter of which becomes available at Exalted and allows a player to obtain the title <of the Shattered Sun> in exchange for a donation of 1000

. Once the Memorial has been built, the quest

[25-30 Daily] Your Continued Support replaces A Charitable Donation for players who are not exalted with the Offensive.

[K'iru's Song of Victory], increasing Stamina by 79 and Intellect by 40.

Assault on the Sunwell

Following the demise of Prince Kael'thas at the hands of the Offensive and the blue dragon, Kalecgos, the Offensive's troops procured a foothold in the Sunwell Plateau itself. However, an Arcane guardian twisted by the Burning Legion blockaded their advance, and threw them back to the entrance. Heroes are tasked with fighting their way through the blood elves' sacred fount of power, and the Shattered Sun captain Selana debriefs new troops on the situation.

The Shattered Sun troops file into the Sunwell's room itself shortly prior to Prophet Velen and Lady Liadrin's own arrival, and are present to witness its rebirth from the heart of M'uru.

Though their work is done, it appears the Offensive has not been entirely relieved from duty. With the Isle of Quel'Danas back under complete control (with all hostile presences phased out in-game, along with the named Shattered Sun NPCs) the blood elves of Quel'Thalas have fortified the defenses of their sacred Sunwell, which is now firmly protected by blood elven wardens and guardians. The Ranger-general of Silvermoon, Halduron Brightwing, can be seen outside the plateau inspecting the guard force. The arcane guardians there are, however, under SSO.

The remnants of the Shattered Sun, meanwhile, still hold a small presence around Dawnstar Village and its surrounding areas, formerly under the control of Prince Kael'thas, and SSO NPCs can be seen assisting the blood elven builders in reconstructing the area.

The Shattered Sun Offensive storyline is unique in WoW as far as gameplay is concerned, as most quests are added or removed based on the completion of server-wide objectives like retaking locations on the Isle of Quel'Danas or activating the Portal to the Isle from Shattrath, and not based on reputation.

Most quests take place solely on the Isle, but a few involve activities elsewhere in Outland. Quests not taking place on the Isle are marked with their zone information below. Once the final phase is reached, there are Shattered Sun Offensive quests taking place in every zone of Outland excluding Zangarmarsh.

Quests are first introduced in the phase designated by their column and either last until the beginning of the phase introducing their replacements if marked by a dagger (†), or are permanently added to the game. The dagger notation is kept throughout the wiki for all links pointing to the removed quests.

[70 Daily] Intercept the Reinforcements (IR) and

[70 Daily] Taking the Harbor (TH), as part of the Sun's Reach Harbor objective, will advance the realm towards Phase 4.

Alternate rows under the "Portal", "Anvil" and "Monument" headers are introduced at the same time as their parent phases (Phases 2, 3 and 4, respectively), but track completion separately from the parent phases. Realms on average will complete the alternate (Phase nB) phases before advancing to the next major phase.

Nearly all of the quests in this table are both daily quests, and available at all reputations starting from neutral with the Offensive. The exceptions are

[25-30 Daily] Your Continued Support (YCS), which is a daily quest available until players reach exalted reputation with the Offensive, and

[25-30] A Magnanimous Benefactor (AMB), which is a one-time only quest, available starting in Phase 4, but requires exalted reputation with the SSO to be eligible. These two quests also have a negative amount listed in the ΔGold column, indicating their status as donation quests.

Due to the rather large amount of information in this table, all of the quest names and rewards have been abbreviated to limit the visible size of the table. Simply hover over the link to bring up a tooltip with the full name of the quest and reward information if javascript is enabled. Additionally, the column headers for the phases link to their relevant sections in the Reclaiming Sun's Reach section of the article.

Players performing these daily quests after the Wrath of the Lich King expansion will now see a lower gold return in exchange for experience granted for completing the quests while still under the level cap. The total for all 19 quests (including YCS but not AMB) will grant 208800 experience, 69

This section contains information that needs to be cleaned up. Reason: Trim; leave only the most notable ones.