Shatterspear Vale is a small valley surrounded by mountainous cliffs on all sides that houses a village inhabited by the trolls of the Shatterspear tribe in Darkshore, Kalimdor.

An Ancient Protector stands in front of the village. 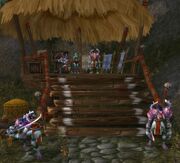 Shatterspear Village as part of the Horde.

The Shatterspear tribe split off from the Gurubashi Empire after the defeat of Hakkar the Soulflayer.[4]

The Shatterspear trolls are friendly to the Horde and were originally neutral to the Alliance until the escalation of hostilities following Garrosh Hellscream's takeover as the new Warchief of the Horde. These once peaceful villagers of Shatterspear Vale have since then come under siege by the forces of the nearby night elves of Darkshore, after they joined the Horde by invitation of the new warchief who sent a battalion of horde enforcers helping the trolls to construct several fortifications in the nearby area outside the vale, including the Shatterspear War Camp, all in preparation for an assault on Lor'danel. The ground around the Vale is covered with numerous troll corpses, as Lor'danel Sentinels combat the Shatterspear trolls from both the air (Sentinels mounted on Hippogryphs) and the ground with their Ancient allies wreaking havoc on the ground. Ultimately, the elves killed the troll chieftain, Jor'kil the Soulripper.[5]

After the trolls left, a large family of foxes made their home here. During the War of the Thorns, Varok Saurfang and his Horde army arrived here through Felwood's mountain.[6]

Following the Burning of Teldrassil, conflicts between the Alliance and Horde continued in northern Darkshore[7] and the night elves posed a threat to Shatterspear Vale. Belysra Starbreeze was encountered here by Horde champions.[8] It also served as a roost for night elf hippogryphs. When the Horde invaded the base, they encountered Leora there.[9]

Fighting continued here between the elves and trolls in the Battle for Darkshore, the village having been reclaimed by the trolls.

Minimap and area border of the village before Cataclysm.

Shatterspear trolls are friendly to the Horde and neutral to the Alliance. The village can be seen from the hippogryph when flying to or from Nighthaven in Moonglade. The settlement is in the mountains between Darkshore, Moonglade, Felwood, and Winterspring, and is practically unreachable by normal means of travelling. It is situated in Darkshore geographically.

The levels of the trolls vary between 52 to 58, they can be engaged by the Alliance (but not the Horde), and give experience and loot when killed. Some trolls also dance and seem to be celebrating some kind of festivity. Aside from the main populace, there are four notable characters, including Una Ji'ro, Jory Zaga, Krah'ranik, and Voriya. A tauren head can be seen hanging by a rope stake on their dancefloor.

Beside a handful amount of troll huts, there is a cave with uninteractable tablets within. A waterfall falls into the main feature of the village — the gray-blue lake. The village is divided into two parts, separated by the small river one can cross using the bridge.

As it was before the Cataclysm