The Shen'dralar (also spelled Shen'Dralar)[1] meaning "Those Who Remain Hidden"[2] were a secretive Highborne society who dwelled in the Athenaeum within Eldre'Thalas. A part of them were accepted back into the night elven society shortly before the Cataclysm[3] and now train night elven mages. 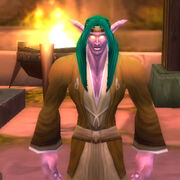 Not all Highborne lived in Zin-Azshari, despite their obsession with the Well of Eternity. For a variety of political or personal reasons, certain members of the nobility opted to live outside the capital city. Moreover, not all night elves (or other races of Kalimdor) joined the main force of night elf defenders. Such holdouts were not necessarily resistant to the idea of joining their compatriots. Indeed, it seems likelier that these small pockets of resistance had heard nothing of the primary defending force and were unaware of the demonic invasion's massive scope. The Shen'dralar were one of these holdout groups.[4]

The Shen'dralar were Queen Azshara's most revered arcanists,[5] charged with the storage and safekeeping of her most precious tomes.[2] Within the walls of Eldre'Thalas the Queen's most important demands were processed - often in secret.[5] Led by Prince Tortheldrin, the Shen'dralar dutifully obeyed their queen. They journeyed into the misty heart of Kalimdor's southern jungles and established a grand city called Eldre'Thalas.[2]

The Shen'dralar defended their city as best they could during the War of the Ancients. As legend has it, it is said that the Ancient Goldrinn came to their aid to help them defend their city against the Burning Legion.[4]

When the Great Sundering later decimated the world, Eldre'Thalas narrowly escaped destruction. Only the efforts of Tortheldrin and his followers spared the city. Together, they wove a great spell to shield Eldre'Thalas from the destructive forces of the Sundering. Although they had saved their city, then Shen'dralar soon discovered that the Well of Eternity had been consumed in the Sundering. Without the fount of power to draw on, Tortheldrin and his followers saw their immortality greatly diminished. The Shen'dralar soon fell into a deep lethargy and languished in their isolated sanctuary.[2]

Tortheldrin eventually formulated a plan to revitalize the Shen'dralar. He forged pylons in the halls of the west wing of Eldre'Thalas, constructing a prison to house a new source of power behind a grand force field: a demon named Immol'thar. To the shock of the other Shen'dralar, Tortheldrin had covertly summoned and bound the terrifying creature to siphon the demon's power and give it to his followers. Any objections were quickly settled once the other Shen'dralar experienced the demon's energy for themselves. Though dark and volatile, Immol'thar's power was invigorating and addictive, more so than the Well of Eternity had been. The siphoned energies would sustain the Highborne's magic, allowing those within the walls of Eldre'Thalas to feed their endless and growing magical pangs. Had the demon broken free of its bonds, it would have destroyed what little was left of Eldre'Thalas.[2][5] This happened around the time the Highborne led by Dath'Remar Sunstrider were exiled,[6] 7,300 BDP.

In the ensuing years, the Shen'dralar continued to be isolated from the rest of night elf society, and so their subsequent dangerous actions went unnoticed by their distant kindred. They were never exiled from Kalimdor, nor have any Shen'dralar become high elves or blood elves.[4]

Thousands of years passed and the power required to keep Immol'thar imprisoned while sustaining life within Eldre'Thalas began to shift. The cost to keep Immol'thar bound grew to overshadow the rate at which energy could be siphoned and distributed. The once net gain turned to loss.[5] Almost overnight, Tortheldrin's seemingly ingenious plan unraveled, and his access to the demon's magic was gone. Not only had the Shen'dralar lost their immortality once again, but they had also grown hopelessly addicted to Immol'thar's potent energies. Desperate to regain his power, Tortheldrin and his Shen'dralar loyalists began murdering their fellow Highborne.[2][5] At least one Highborne, named Azj'Tordin, has escaped death at the hands of Prince Tortheldrin, but most have not been so lucky. Their spirits now wander the corridors and courtyards of Dire Maul.

Tortheldrin's treacherous plan worked. Having thinned the population, the remaining elves could draw on Immol'thar's power indefinitely.[2] Unsurprisingly, Prince Tortheldrin guards jealously the secret of this arrangement, and those who meddle in his domain, such as the blood elf Kariel Winthalus, can expect a brutal end.[7]

With the Shen'dralar's numbers diminished, Tortheldrin and his followers abandoned much of their once-glorious city. The greater part of Eldre'Thalas fell into darkness and despair. Soon, other creatures from the surrounding jungles moved in to stake their claim to the crumblin elveng refuge.[2]

The Shen'dralar are knowledgeable about a great many secrets and did, tantalizingly, know where the Ashbringer could be found before it appeared in Naxxramas.[8]

In Year 25, the majority of elves, including the prince, was killed by the Horde when they raided Dire Maul. The surviving ones fled the ruined city and wandered in the woods for years, trying to wean themselves off demonic power and feel whole again.[9]

The return of the Highborne

The Shen'dralar Highborne first resurfaced around the time of the assault on the Icecrown Citadel, with Daros Moonlance coming to the Silver Enclave in Dalaran and Mordent Evenshade arriving to Darnassus in order to seek an audience with High Priestess Tyrande Whisperwind.[10]

The Highborne Shen'dralar sorcerers from Dire Maul eventually settled in Darnassus. Many night elves were wary of their guests as they dredged up painful memories from the past. The Highborne in particular were treated with suspicion and even open hostility.[11] They began training new night elf mages. Because their expulsion from night elf society after the War of the Ancients was due to their use of arcane magic, the blood elves were outraged to hear that the kaldorei had welcomed the Highborne back and were tolerating the practice of arcane magic again. After witnessing the "rookie" mistakes made by the new kaldorei magi, however, the blood elves are anxiously awaiting whatever mess the kaldorei are going to put themselves in. What's more, some sin'dorei have been able to exploit the kaldorei's inexperience in order to rout Alliance forces, as seen in the "

Over the next years, Mordent and his Highborne followers continued to serve the Darnassian night elves and the Alliance, with Mordent surviving an assassination attempt in Darnassus[13] and encountering the Horde in Blackfathom Deeps following the Burning of Teldrassil,[14] as well as participating in the Battle for Darkshore.

During his journey to collect information and find a way to defeat the Old Gods, Wrathion expressed his admiration for the Highborne library, despite being abandoned and damaged.[15] Nevertheless, some of their librams appear to have survived the devastation, as by the time of the end of the Fourth War, Lorekeeper Mykos made a donation to the archives of the Sanctum of Light by removing the Athenaeum seal of the book

[The Light and How to Swing It], so that all paladins can read it.[16]

The Shen'dalar faction became unobtainable in Cataclysm, so that

[Agent of the Shen'dralar] has been given to those who gained exalted with the faction before patch 4.0.3a.

[Codex of Defense] for warriors or

[Garona: A Study on Stealth and Treachery] for rogues. Each libram and class book turned in nets +500 reputation points. Further, turning in librams rewarded characters with an augment for their head piece. While librams could be turned in repeatedly, class books could only be turned in once.

Insane in the Membrane

In patch 3.1.0, a new Feat of Strength was added, which when exalted with the four Steamwheedle Cartel cities, honored with Bloodsail Buccaneers, and exalted with Ravenholdt, Darkmoon Faire, and Shen'dralar will give the player the title "<name> the Insane". Shen'dralar has since been removed as a requirement for this feat.