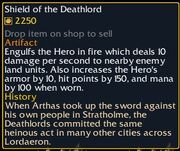 “A magical shield with the emblem of an unfamiliar Paladin order on it.”

The Shield of the Deathlord was acquired by Rexxar when he slew the Eldritch Deathlord.[1]

Exactly who created this shield is unknown. Some believe the Lich King himself designed it for his most powerful death knights, while others feel it is a demonic artifact brought to Azeroth during one of the great wars and lost by its original owner. It might also be from a different world entirely, flung into the Twisting Nether eventually to find its way to Kalimdor.

When first found, the Shield of the Deathlord looks fairly unassuming — a slightly curved sheet of darkened steel rimmed with a jagged border and covered with what appear to be scratches and dents across its surface. If picked up by a creature that is not evil, it acts as a light steel shield but its powers slowly attempt to convert the bearer to the cause of evil. Each time he slays an enemy in battle, the shield's owner may shift toward evil. The change is so subtle that the owner might not even be aware that anything unusual is happening. Should the owner be evil or convert at last to that alignment, the shield's true nature becomes known. To the owner, it now appears to be covered with skulls that bear demonic horns and sharp canine teeth, and its true powers are unlocked.[2]