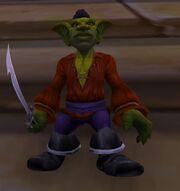 Short John Mithril is a goblin pirate captain of the Bloodsail Pirates[2] and an arena master in the Gurubashi Arena in the Cape of Stranglethorn. He initiates the battle of the chest in regular intervals of every 3 hours. When the game clock strikes 12, 3, 6, or 9, Short John will start the battle.

He also appears on Mechagon Island in search of murloc treasure.

Arr! There be nothin I like to see better than folks fightin to the death in the arena. If you be here at the right time maybe you can be one of them!