The Shrine of Dath'Remar is a monument located on the west side of Sunstrider Isle in Eversong Woods.[35.3, 40.2] 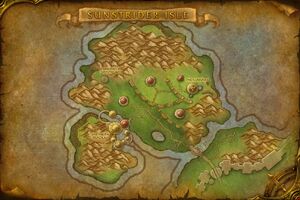 It was created to honor Dath'Remar Sunstrider, the first king of the Sunstrider dynasty.

When inspected, the plaque located on the front of the shrine reads:

You have discovered the location of the shrine! Upon further examination, you sense a stronger pulse of the strange power that has gripped the Isle. You feel a bit uncomfortable standing by the shrine... And perhaps a little disturbed.

The bronze placard along the side of the shrine reads:

"Here stands the Shrine of Dath'Remar, a fitting tribute to a noble elf. Let all who gaze on this monument remember his sacrifices for our people and his dedication to the cause of our continued survival. All who prosper in Quel'Thalas do so thanks to him."