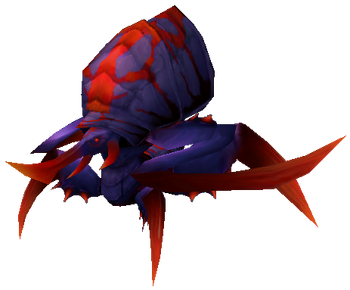 Silithid colossi are huge creatures with brutal strength. In each of the three hives of Silithus sleeps one, awaiting battle.

With their four legs, two scythe-like arms, gouging horns, and large two-part bodies, they seem similar to the kunchong of the Mantid and the spiderlords of Azjol-Nerub, hinting at a shared origin. Their massive thorax-heads seem to contain a giant brain, which can become exposed.

After The Scarab Gong was rung and the ancient Gates of Ahn'Qiraj opened, the horrors of the silithid and their qiraji masters were revealed. Massive qiraji resonating crystals broke through the earthen crust of Kalimdor and the colossi of the hives in Silithus emerged from their cocoons beneath the hives. They heard the call to battle and rose to serve their masters. They cast their massive shadow upon the whole of Silithus and marched into war.

The possibility that more of those beasts existed deep within Ahn'Qiraj was confirmed when the instance was opened. Buru the Gorger, along with the Silithid Royalty, are silithid colossi.

In World of Warcraft: Cataclysm, it seems that lesser hives (or rather, at least one, possibly more) may also spawn colossi. Other colossi were also added other hives. It is possible for beastmaster hunters to tame one.