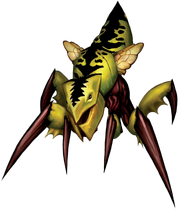 Silithid reavers, also called battle tanks, are the main attack troops of the silithid. They are very aggressive. Reavers are morphologically similar to the silithid wasp, except with underdeveloped vestigial wings. The Qiraji battle tank mounts are mount versions of these. There is also the

Silithid reavers are the hives' primary defenders. They dwell mostly underground or near tunnel entrances, using their darkvision and scent to ferret out intruders. Reavers are defensive by nature and spend most of their lives guarding a particular area or section of tunnel. They do not advance beyond their patrol area to attack, and might seem non-threatening until one gets too close.An average reaver is 8 feet long and 5 feet tall, weighing 350 pounds.[1]