For the lore of the zone and its status before the Cataclysm, see Silithus (Classic).

“Silithus has ever been a magnet for ancient, malevolent powers. I could open a timeway to reveal how the Black Empire once sprawled across these sands. Or show you wars waged between mighty armies.
So much history. So much pain.”

Silithus (also known as the Silithus Desert)[1] forms the southwestern corner of Kalimdor. It can only be reached on foot by traveling to the northwestern corner of Un'Goro Crater, where a wide path extends out of the crater and into Silithus.

Silithus is one of the insect infested sections of southern Kalimdor. This area houses a section of the once great Aqiri empire, known as Ahn'Qiraj. It is currently uninhabited, but the central temple is sealed off by the night elves, who attempted to prevent an infestation from breaking out. They were unsuccessful in their attempt to seal them behind the Scarab Wall and over the millennia the Silithid spread hives from Silithus to as far as Feralas. The Cenarion Circle maintains a constant presence in Silithus at Cenarion Hold. From here they monitor the defeated Silithid hives, whom the Cenarion Circle suppressed alongside the Alliance and Horde during the opening of the gates of Ahn'Qiraj. The bronze dragonflight, Nozdormu's brood, returned to the desert for the first time in ten thousand years before the opening of the gates.

Silithus had been fleshed out as a major quest hub with episodic storylines that extend into its depths and past its borders during the Gates of Ahn'Qiraj event. The redesign of this zone included a high-end outdoor quest area for solo players, while 5-man groups could tackle outdoor raid bosses.

In patch 1.12, objective based world PvP was introduced into Silithus. A new crystalline substance called "

[Silithyst]" has been discovered, and both the Horde and Alliance have taken an interest in it. Players collect the dust where they can but must be careful they are not ambushed by opposing faction members before they can make their drop-off. See The Silithyst Must Flow for details.

Although the majority of Azeroth was reshaped by Deathwing's reemergence during World of Warcraft: Cataclysm, Silithus uniquely received little to no physical change. Considering the vast majority of quests in the region involving the Silithid and Qiraji being removed and the focus now being on battling the increased presence of the Twilight's Hammer cult, it can be assumed that the threat of C'Thun and his retinue is gone, if only for a moment.

At the end of the third invasion of the Burning Legion Silithus was completely devastated when Sargeras tried to destroy Azeroth after impaling his sword of into the center of the desert. As the Speaker rallied the wielders of several powerful artifacts to drain the sword of its destructive energies, he found a secret vault deep beneath the surface from where he would continue saving the titan within the planet, drawing help from both Alliance and Horde in spite of the Fourth War.

Silithus has for thousands of years held the prison of the Qiraji, trapped behind the Scarab Wall in the aftermath of the War of the Shifting Sands. The Qiraji's servants, the silithid, have since multiplied and spread across southern Kalimdor. Seeing this, the night elves decided to reopen the Gates of Ahn'Qiraj to put an end to the Qiraji threat once and for all.

Elementals invaded the area only to be fought by the adventurers of the Alliance and Horde.

Prior to the start of the invasion of Outland, Silithus was invaded by a group of Burning Legion demons led by Highlord Kruul.[2]

At the climax of the third invasion of the Burning Legion, Sargeras attempted to destroy Azeroth. Although he was stopped and imprisoned by the Pantheon, he did manage to wound the planet in Silithus. Azeroth's world-soul began to bleed out of the wound Sargeras inflicted, forming a pool of arcane blood in the area. As a result of the damage, Azerite - crystallizations of her blood - began to emerge across the planet. At the Seething Shore off of Silithus's coast, Alliance and Horde began to fight over it.

Soon after, the Horde took control of the wounded Silithus.[3]

This huge desert lies in the southwestern tip of Kalimdor. The rock and sand terrain is broken up only by the massive hives of the silithid. Following Sargeras's failed attempt to destroy Azeroth, most of the zone has been obliterated. There is now simply a large wound with a pool of Azeroth's blood in the center.

Silithus is the location of two raid dungeons, the Ruins of Ahn'Qiraj and the Temple of Ahn'Qiraj. There are also several micro dungeons. Though there are no battlegrounds in this area, there is some outdoor PvP available.

To get there on foot, travel to the NW corner of Un'Goro Crater. The river that passes through Un'Goro looks like a snake. It is at the snakes head. You will see two pillars. [29, 21]

Silithus is home to several characters of note. At Cenarion Hold, Commander Mar'alith seeks information about his missing wife, who was last seen in the company of the silithid. At Bronzebeard Encampment, Rutgar Glyphshaper helps him unravel the mystery and inquires as to the whereabouts of the famous explorer Brann Bronzebeard. And at the Ravaged Twilight Camp, Highlord Demitrian has a mission of great importance to the most experienced heroes - face off against Prince Thunderaan and defeat him.

Silithus is a desert stretch of land, arid and hostile. Miners will find various spots of Thorium ore all over the area, both small, rich and ooze-covered, above ground and in tunnels wherever the Silithid have dug their hives. 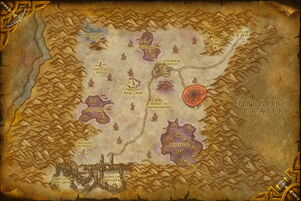 Silithus only has one dig site:

In Un'Goro there is a barely noticeable path leading up the northwestern edge of the crater into the forsaken area known as Silithus. The night elves in Valor's Rest cut this path,[4] which picked its way through rocks and the immense boles of trees. Once you climb out of Un'Goro the air becomes drier, but no less warm, and in front of you there is another bleak, desolate, windswept desert.

Apparently, Silithus was once occupied by night elves, in the days before the Sundering. Now, the Cenarion Circle, a band of druids concerned with keeping the land in balance, is watching over the silithid which, in their words, present a major threat to all Kalimdor, and perhaps the entire world. Unlike other silithid hives found in Feralas, Tanaris or Un'Goro, in the ones in Silithus there is evidence of intelligent movement by the bugs.[5]

As with any desert, it is recommended to bring along a supply of water if you expect to survive, and you better not count on a lot of hospitality from the natives. The elves keep to themselves, and the Twilight's Hammer won't give up supplies cheaply. You're on your own in this place.[4]

Long ago, before the Sundering, there were two troll empires: the Gurubashi and the Amani. At some point in their history, the trolls found themselves threatened by an insect race called the Azj'Aqir. Eventually the trolls beat back the creatures and split them into two factions, the nerubians in the north and the qiraji to the south. The nerubians eventually faced the Lich King in Northrend, and the qiraji fought the night elves in Silithus after the Sundering. The elves won, but the land was blasted by the war, and the elven towns were left in ruins. Thus you have the smashed remnants of Southwind, and several other smaller elf villages scattered throughout the region.

The silithid are not the same as the qiraji, which, as tales say, walk upright like men. The Scarab Wall was built either by the elves to keep the surviving qiraji out, or by the qiraji to keep themselves safe from the elves. Nobody knows or remembers. The elves of the Cenarion Circle think the silithid aren't just intelligent, they are part of some sort of grand plan by the qiraji, or some other as yet unknown force.

There are only two non-insect groups in Silithus: the Cenarion elves, and the Twilight's Hammer. These last people, mostly Horde but with a few humans, far outnumber the druids. Fortunately they keep to themselves, performing strange rituals and digging through ruins. They spend most of their time fighting insects for access to ancient Kaldorei cities, caring little for the fate of travelers.

Apparently, the Twilight's Hammer members' main purpose here is to locate and recover massive ancient crystals located deep under the desert sands. Why they're doing this, is not known. These crystals, spread in the desert, resemble the rune-covered black spires that float in mid-air near Un'Goro.[6]

Silithus is a wasteland similar to Tanaris but without friendly goblins providing water. Still, rain falls frequently enough to maintain a greater diversity of life. The plant life soaks up and stores water, so travelers can find what they need by harvesting the hardy cacti that dot the landscape.

The worst threats in Silithus are the frequent windstorms and towering dust funnels, which form as gusts snake their way through the broken rocks and sheer cliffs that dot the landscape. Rogue air and earth elementals lurk in the corners, striking at living creatures. Fortunately these creatures stay mostly in the deep desert, away from settlements and cautious travelers.[7]

There are really only two settlements in Silithus, Valor's Rest and the Twilight Base Camp. The Twilight's Hammer has other outposts scattered here and there, including one in Crystal Vale, but they are nothing more than watchtowers and a couple of tents.[8]