Sir Finley Mrrgglton is a sophisticated murloc adventurer who is a member of the Explorers' League, or "League of Explorers".

Finley can be found at Dreyrgrot in Stormheim on the Broken Isles, where he gets involved in the affairs of blood-thirsty pirates led by the vrykul Blood-Thane Lucard while on his way to study the local murlocs.

He can also be found in one of the watchtowers on the atoll island of Sandy Beach in the Shimmering Expanse in Vashj'ir. Here he trades seashells for gold, which in turn can be traded with the wildlife in order to gather items that can again be traded for Finley's

He can also be found on Mechagon Island. He makes an appearance at the Maker's Ascent in Uldum during the Assault in Uldum along with several other members of the league. 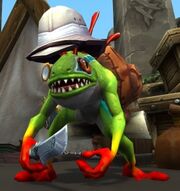 What-ho traveler! What brings you to these dusty ruins?