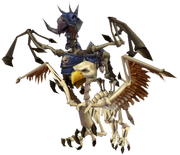 Due to the only pre-WotLK example of this creature type existing by the unused Karazhan flight point (and Netherspace to some extent) with a very generic name, it could possibly be thought that their role was going to be the mounts that that flight path used.