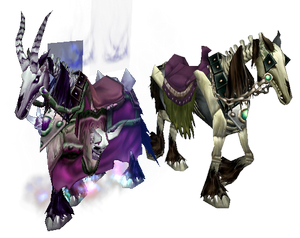 “When fallen heroes are raised into undeath, so too are their horses.”

Skeletal horses are the remains of horses that have succumbed to the Lich King's plague. They have since been raised from the dead by the Royal Apothecary Society in the Undercity and are now used as mounts by the Forsaken.

The Forsaken believe that without a purpose, even beasts of burden suffer in undeath.[1] At least some skeletal horses have been known to try to graze as they did in life, oblivious to the fact that the grass simply falls back to the earth when they attempt to chew it.[2]

Prior to the coming of the Scourge, skeletal horses were raised by the death knights of the Old Horde to serve as their mounts.

When the Lich King's plague of undeath swept through Lordaeron, it decimated more than just the kingdom's human population. Many of the noble horses living in the region also succumbed to the affliction, and much like their human counterparts, they were not granted peace in death.[3] The Forsaken's Royal Apothecary Society has also raised numerous fallen steeds through an arcane mix of alchemy and necromancy to serve as mounts for the vengeful dead. These undead steeds are as strong as they were in life, and far more resilient. An unfortunate characteristic, however — one that the Forsaken are none too enamored with - is the steeds' almost universal stubbornness. From death and beyond, the mighty steeds still cling to the willful spirit that served them in life.[4]

Epic skeletal horses, aside from the Forsaken, were also used by the Scourge as mounts for their death knights. Epic skeletal horses look very similar to the death knight mounts from Warcraft III. Several Skeletal Steed mobs appeared in the original Naxxramas Military Quarter, and the Four Horsemen rode their skeletal steeds into battle; although the revised instance (as with the expansion in general) would replace the skeletal horses with Deathcharger Steeds, the Horsemen continue to ride their orginal steeds.

Blue skeletal warhorses are a rare sight. Most disappeared once Baron Rivendare ruled in Stratholme.[5]