Sky'ree (also called Sky-Ree[1] or Sky'rie[2]) was the legendary gryphon mount of Kurdran Wildhammer, the equally-legendary hero of the Second War and afterward. Sky'ree was eternally loyal to Kurdran and would willingly sacrifice her life for him.

With her master, Sky'ree gained a spectacular reputation among the Wildhammer clan, bearing him into battle against the red dragons enslaved by the Horde during the Second War. Kurdran had nine dragons on his death toll during the war. The pair later traveled through the Dark Portal as part of the Alliance Expedition, where Kurdran acted as a scout during the excursion into Draenor.

Both Kurdran and Sky'ree were captured during the raid on Auchindoun, but were rescued by the Alliance.[3] 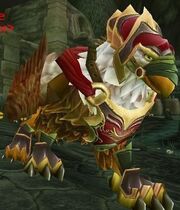 After Deathwing caused the Cataclysm, Sky'ree accompanied Kurdran to Ironforge when he joined the Council of Three Hammers, and she laid a clutch of three eggs shortly after arriving, in a nest at the city's gryphon roost. Sky'ree had grown quite old; the cloud of age was thick in her eyes, and while she had easily flown Kurdran to Ironforge, laying the clutch had severely weakened her. She became so frail that even a daily walk with Kurdran was an uncertainty. Nevertheless, when she could do so she seemed to enjoy exploring every nook and cranny of the city.

With the roost overcrowded with Wildhammer gryphon nests, a group of ten Dark Irons tried to pass by with kegs of what presumably was Dark Iron Ale, but one slipped on some straw, causing a smashed keg to spill all over the roost. The Dark Irons instigated a brawl, eventually knocking over a brazier and setting the gryphon roost ablaze. Though two other gryphons tried to work together to airlift the weakened Sky'ree by her wings, she refused their assistance, wanting to protect her clutch from the fire. Unfortunately, her efforts were for naught, and both Sky'ree and her unhatched eggs perished in the fire.

However, Sky'ree's keeper, Eli Thunderstrike who had been tending to the Wildhammer gryphons at the roost, discovered a miracle. He found that the gryphon that had been huddled beside Sky'ree was holding an egg. Since none of the other gryphons had been tending to a clutch, Eli realized that it could only have been one of Sky'ree's eggs, which the gryphon had clutched to his chest as he escaped the flames.[4]

When the Wildhammer dwarves Keegan Firebeard and Fanny Thundermar got married, Kurdran gave the happy couple Sky'ree's last egg, entreating them to honor and care for the hatchling.[5] After it hatched, they named Sky'ree's daughter Sky'reen. They brought her to Lunarfall.[6]