This item is a possible reward from the quest

[60] Back to the Orphanage which begins with Orphan Matron Mercy in Shattrath City's Lower City during the Children's Week seasonal event.

He's slightly evil but extremely narcoleptic. Keep him away from critters!

Magic: Cannot be dealt more than 35% of their maximum health in one attack. 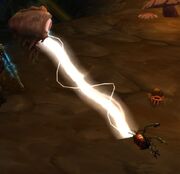 Willy has a non-combat pet ability (also possessed by Lil KT, Toxic Wasteling and Scorchling pets) in that he can kill almost any creature in the game classified as a "critter" (rats, cows, etc). Willy will automatically attack a random, single critter that is within a 10-yard radius, and the attack occurs once every 3-minutes (if no critter is within the attack radius then that attack is simply skipped at the appropriate time and the timer resets). The timer resets when Willy is first summoned (or unsummoned/re-summoned), and continues counting as long as Willy remains summoned. He also has a tendency to fall asleep and wake up with a start.

The other item reward options from the quest line are

[Legs]. Only one can be chosen per year, but the quest is annually repeatable.

Note that Willy has a single eye; many players assume he is a pun on the phrase "One Eyed Willy", which is crude slang for a male reproductive organ. It is also possible that the name "Sleepy Willy" is a reference to the pirate One-Eyed Willy from the movie The Goonies.

Quality changed to uncommon, from rare.