Firelord Smolderon is the Elemental Lord of fire and master of the Firelands. He had been fighting for power against Pyroth following the death of Ragnaros during the Cataclysm, until the Earthen Ring helped make him the new Firelord during the third invasion of the Burning Legion. However, shortly after becoming the Firelord, he went missing.

The death of Ragnaros after the Cataclysm left the Firelands in utter chaos.[2] The elementals residing there became engaged in an epic battle for supremacy.[3] Eventually Smolderon and Pyroth, the son of Lord Rhyolith, would emerge as the top contenders for the position of Firelord.

During the third invasion of the Burning Legion, the shaman of the Earthen Ring attempt to unite the Elemental Lords once more, and recruit them in the fight against the Burning Legion. Upon witnessing the civil war raging in the Firelands, the Farseer sent scouts ahead and learned that Smolderon was more willing to work with mortals than Pyroth. The Earthen Ring retrieved

[Emberscar, Brand of Damnation] for Smolderon to wield, and then slew Pyroth. Now free to rule uncontested, Smolderon became the new Firelord. In exchange, he would help the mortals against the invading demon.

Smolderon sent a servant by the name of Baron Scaldius to represent him and to aid the Ring at the Heart of Azeroth.[4] Smolderon himself later journeyed to the Broken Shore to disrupt the Legion's control over the elements and to request the Ring to put an end to Barastagax the Flamecleaver, a demon who had somehow been able to use the power of the Firelands, which greatly angered Smolderon.

When the Cult of Ragnaros attempted to revive Ragnaros in Sulfuron Keep, Smolderon was missing. A worried Anvil-Thane Thurgaden was even wondering where Smolderon was, to which the cult's apparent leader High Justice Grimstone only replied "All in due time."[5] 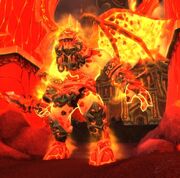