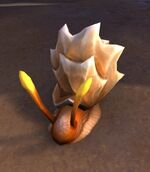 Snails are slimy,[1] shelled molluscs.[2] Most are tiny and harmless, but some types are monstrously large.

Silkbead snails hide in their shell to escape the claws of nearby crabs.[3] Shimmershell snails hunt for food just below the water's surface on the coast of Darkshore.[4] Rapana whelks have been spotted fighting other whelks for prime food sources.[5] Freshwater snails are sometimes cooked up and eaten as an exotic meal by the Forsaken.[6] 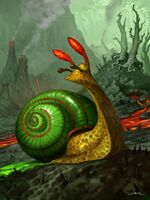 A snail in Hearthstone.