For the character from an alternate universe, see Exarch Othaar.

Socrethar (formerly Exarch Othaar) is an eredar who betrayed his kin and joined the Burning Legion. Rather than one of the original man'ari who joined Sargeras' Legion on Argus, Socrethar was in fact a draenei and a once renowned warrior of the Light, whose only flaw was pride.[1] 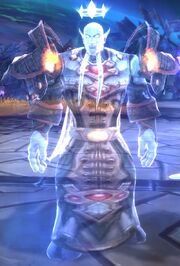 Othaar lived in Mac'Aree on the eredar homeworld of Argus. An echo of him called Councilor Othaar can still be found there, watching a jed'hin match at the Circle of Aspirants. Othaar likes to think they must practice such a basic ritual as jed'hin to remind themselves of how far they have come and that Argus has much to be proud of.

Upon arrival on Draenor, Prophet Velen decided to establish a council of sages that would look after the draenei. Othaar was chosen as the fourth Exarch as a leader of the Sha'tari order. They were tasked with studying and analyzing the injured naaru D'ore and its kin in order to learn how to communicate with the other naaru and draenei beyond Draenor.[2]

At an unknown point, he betrayed the draenei and joined the Legion.

He ruled the Burning Legion forces from his throne named Socrethar's Seat. Socrethar could be seen talking as an image to the dreadlord Culuthas, who had found the legendary Spirit's Song, granting him immense amounts of power. Culuthas then broke away from the Legion, and started summoning his own demons. Socrethar ordered him to bring the Ata'mal crystal to the Legion or else face definite death.

He is easily kiteable and affected by Crowd Control such as

[Cyclone]. If your healer is low on mana it may be wise to banish Socrethar in order to allow the healer to regain mana. If you do try to kite him, be aware of his Anti-Magic Shield.

Kaylaan the Lost: (Aldor only)

Avenger's Shield: Hurls a holy shield at the enemy, dealing 203 to 247 Holy damage, Dazing them and then jumping to additional nearby enemies. Affects 3 total targets.

Divine Shield: Protects the caster from all attacks and spells for 8 sec., but also increases the time between attacks by 100% during that time.

Heal: Calls upon Holy magic to heal an ally for 50 health.

Holy Slam: Inflicts normal damage plus 30 to an enemy and knocks nearby enemies back.

Resurrection: Resurrects a target, healing them for full health.

Kaylaan typically attempts to heal himself when he is between 30% to 40% health, if you get him below 30% health, he will no longer be aggressive. His Heal will normally heal him to full health. Kaylaan hits for a lot even on a properly geared tank, and ironically he hits more than Socrethar does.

Adventurers allied with the Scryer can receive

[Voren'thal's Presence] increasing damage dealt to Socrethar by 300%. This makes it possible that Warlocks can drain life him to death.

The Aldor version is much more difficult but has more lore. Upon arrival at Socrethar's Seat you are greeted by several Aldor NPCs, talking to one begins your advance upon Socrethar. As the champions of the Aldor confront Socrethar, Socrethar calls upon an ally of his own. Kaylaan the Lost appears, the Draenei was once the Aldor champion Kaylaan who had remarkable potential, but he saw his brother get killed by Voren'thal himself. Seeing Voren'thal and his Scryer allies being accepted in Shattrath City was a breaking point for Kaylaan, he turned to Socrethar for power to fight his enemies. Socrethar further empowers him causing Kaylaan to go into a rage-like state and thus released upon you and your Aldor allies. Getting Kaylaan down to low life spawns High Priestess Ishanah. Socrethar proceeds to one shot Ishanah, Kaylaan seeing his beloved mentor die breaks out of his condition and proceeds to resurrect Ishanah. Socrethar seeing this betrayal right infront of him proceeds to claim Kaylaan's soul. Now along side Ishanah, Aldor champions proceed to kill Socrethar. Ishanah at the end of this ordeal remarks not even her strongest prayer could bring back Kaylaan.

Main article: Deathblow to the Legion#Dialogue