Sons of the Storm 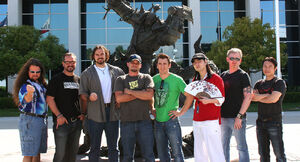 On December 13, 2017, Samwise announced on Twitter that it was time to say goodbye to Sons of the Storm for its 13th anniversary.[1] The website finally went down on August 18, 2018, when its subscription ran out.[2]

From the site of Sons of the Storm:

Forsaking such rewarding pursuits as painting signs and cleaning crap-ridden movie theaters; no longer content to repair watches, park cars and serve summonses to the dregs of humanity; sick of sleeping in the back seats of Dodge Demons, Ford Mavericks and on friends' parents' patios; weary of abusing one-month free trial memberships to shower at local gyms under the scrutinizing gaze of geriatric racquetball aficionados... this motley pack of wanderers joined under the banner of the storm and united to form a mighty clan of artists, storytellers and world-creators. This is their domain where you will find a haven against such soul-leeching madness as cell phones, reality TV, MySpace, the Gilmore Girls, American Idol and Starbucks. Starbuck is a STUD fighter pilot from Battlestar Galactica, not a place that hawks seven dollar mochas. Cast off your shackles and answer the call of the storm![3]

From the site of Sons of the Storm: