Sorcerers (also spelled sorcerors) are a type of magi of various races that are capable of magic, such as mogu, ethereal, eredar, pandaren,[1] arakkoa, undead, ogres, night elves, orcs, tol'vir[2] and even tauren,[3] Broken,[4] saurok,[5] and nerubians.[6]

In World of Warcraft, sorcerers can be found all over the world of Azeroth in many zones.

Jaina Proudmoore is stated to be the most powerful human sorceress alive.[7] Cho'gall is referred to as an immensely powerful sorcerer.[8]

Zian of the Endless Shadow of the mogu and Imperator Mar'gok of the Gorian Empire use the title Sorcerer King. Andromath is a High Sorcerer and Morran is a Lieutenant-Sorcerer. There are also two High Sorceresses, Aryna and Marala.

Female naga are incredible sorcerers, commanding the power of water and ice at their fingertips.[8]

The Sorcerer's League was one of three factions within Dalaran during Third War that attempted to defend the city. 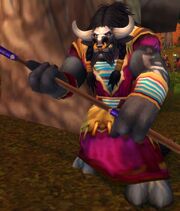 Sorcerers own great talent for arcane spellcasting, but they have not harnessed it through the intensive training that wizards pursue. Most people do not make a distinction between sorcerers and wizards, although the latter may often refer to the former as hedge wizards or some other term.

Night elves bear a particular dislike for sorcerers, seeing them as vessels of demonic power. Wizards, at least, attempt to manipulate arcane power through controlled processes, rather than letting their own bodies act as conduits.

Sorcerers can come from any race. Night elves who takes this class are stripped of their racial heritage, effectively transforming into high elves, although they do not physically change.[11]

High elves are renowned for their magic, and on the battlefield, elven sorcerers often accompany Alliance troops into the thick of the fray. Although not physically powerful, the skill and bravery of these elves is beyond dispute. The elven sorcerer prefers to serve as part of a group, preferably in the rear with a few people to guard them. Mana shield is deployed to provide additional protection, while spells like slow and invisibility support their allies.[12]