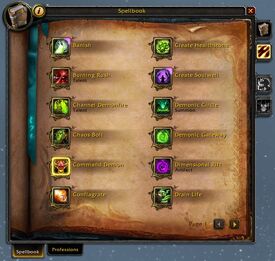 The Spellbook contains a list of all spells and abilities known by your character. It is part of the Spellbook & Abilities interface. The default keybinding is P.

The spellbook is divided into four or five categories, or tabs: General, containing all of your character's guild perks, racial traits, and general abilities such as Riding skill; and one tab for each of your class's specializations, where all of your class-specific spells and abilities can be found. A paladin, for example, would have a General tab, then Holy, Retribution, and Protection tabs as well.

Abilities that are currently known by the character are listed first in the spellboook; active abilities coming first, followed by passive abilities, in alphabetical order. Following these are the abilities that have not yet been learnt, in order of the level at which they became or will become available to learn. Abilities that are available to learn but have not yet been learnt are illuminated, with a trainer icon next to them; abilities not yet available at your level are faded, but still display full information on the ability, as well as the level at which they will become available.

Each spell icon can be dragged onto an action bar. Where ranks exist, the highest rank of an ability is always shown. Abilities not yet available at your level cannot be dragged to actions bars.

Characters under level 10 have only a General tab and a <class> tab corresponding to their class. In this tab all non-specialization-specific abilities are listed.

Once level 10 is reach, the single <class> tab is replaced by three tabs, one for each specialization. Each tab lists all of the class abilities available to that specialization.

The non-current tabs also do not maintain the separation between abilities that you have and have not learnt; all active abilities are listed first, followed by passive abilities, in alphabetical order, regardless of whether your character knows them or not. However, abilities not yet available at your level still display their level requirement, allowing you to tell them apart.

Now also has the Professions tab, Mounts tab, and Companions tab. It is also the location of the Guild Perks.