Not to be confused with Magic breaker or Spellbreaker (death knight talent). 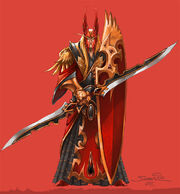 Spell Breaker from The Frozen Throne.

Spellbreakers (or spell breakers) are a blood elf unit that excel at battling caster units.

They appeared in the Warcraft III: The Frozen Throne human campaign aiding Kael'thas Sunstrider. They are produced at the blood elf arcane sanctum. Spellbreakers had yet to be seen in World of Warcraft until Mists of Pandaria, where they made their official debut as named NPCs.

From Spell Breaker at Battle.net

Elven warrior trained to disrupt and contort magical energies. These Blood Elven warriors, fresh from the destruction of their homeland, have turned a new eye towards the dying land of Lordaeron. Can it possibly remain their home? Has Spell Immunity. Attacks land units.

While they were already few in number to begin with, the ranks of this formidable fighting force were thinned drastically when their headquarters on the Isle of Quel'Danas was overwhelmed by Kael'thas Sunstrider and his Burning Legion forces. The lone squad that remains now exists as a relic of a bygone era, as the spellbreakers have refrained from training any new recruits since Kael'thas's betrayal.[1] What happened to the ones that followed Kael'thas has not been explained.

In more recent times, Regent Lord Lor'themar Theron himself ordered a revitalization of spellbreaker training, leading to a resurgence of spellbreakers among the blood elves' ranks.[2]

Lor'themar Theron fielded a regiment of spellbreakers during the Horde campaign in Pandaria. Spellbreakers proved an invaluable defense force in Krasarang Wilds,[3] and serve as sentries as part of the Sunreaver Onslaught.

The Felborne have Felborne Spellbreakers in Suramar and on board Kil'jaeden's flagship in the Twisting Nether.

Silvermoon Spellbreaker on the Isle of Thunder.

The deadly, two-bladed swords of the spellbreakers strike fear in the hearts of wizards and sorcerers. The blood elves' elite warriors employ these frighteningly effective weapons to execute outlawed spellcasters, necromancers and other evil practitioners of magic. This blood-elven two-bladed sword is the bane of any evil spellcaster. The blades can cast globe of invulnerability when spun, and can make casters forget spells.[4]

The powers of the spellbreaker are terrifying to those with knowledge of magic, for their blows shatter the mana from a spellcaster's body.[5] Their abilities focus on destroying spells.

The Monster Guide makes reference to spellbreakers as a class blood elves become, along with already existing classes in the Warcraft RPG.[6] Perhaps it was hinting at an inclusion of the class in a future RPG supplement, but it never came to be.