“For travelers limited to two legs, Arak is an autumnal, swampy forest, framed in crooked trees that rest chin-level with giants. High above the trees towers a landscape rarely seen by outsiders: impossibly tall rock spires too steep to scale. The arakkoa gaze out from these treacherous perches, watching their land like incarnate gods... and paying homage to the blessed sun by burning the "low races" alive.”

“A young hunter hears a great beating of wings above his head. By the time he recognizes it, he is already doomed.”

Spires of Arak is a zone in southern Draenor. Previously known only as Arak, it once contained a single massive spire that dominated the forested landscape, before it was sundered by the destruction of the Apexis' Breath of Rukhmar.[2] It is the homeland of arakkoa, who rule over the land from the Skyreach, a majestic palace situated atop the largest spire in the area. Their society, however underwent a great schism between the winged arakkoa and the wingless, who are considered lesser beings by their winged brethren. Many of the wingless arakkoa flee the Spires and pour into Talador, while the Iron Horde's Shattered Hand clan strengthens their presence. Many Azerothians also have built their bases along the coast, such as the Steamwheedle Cartel or the Alliance expedition led by Admiral Taylor.

All that remains of the Spires of Arak in Outland is Skettis, which is now considered to be a part of Terokkar Forest (formerly known as Talador).

Continuing the tradition started on the Timeless Isle, Spires of Arak has a huge number of vignettes, which are one-time events like killing rare mobs, looting treasure chests, or completing scripted events. Nearly all of the vignettes reward 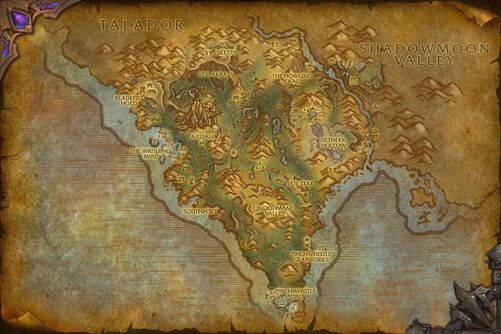 Artcraft—The Spires of Arak Exploring the design and creation of the zone's landscape and environment (2014-05-06)
Español
Community content is available under CC BY-SA 3.0 unless otherwise noted.
Advertisement