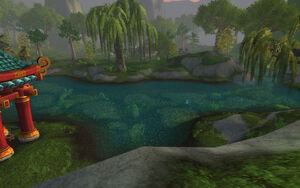 Spiritsong Lake can be found just east of Honeydew Village in north-central Jade Forest. Along its eastern edge is what appears to be a small shrine. Turtles inhabit its waters and shores, and spirits similar in appearance to the ancient spirit, Shu, float along the surface.

Ethereal Lake during the Mists of Pandaria beta.

A portion or version of this article was merged from