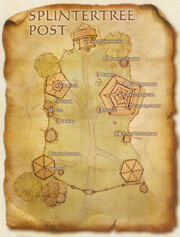 Splintertree Post is a Horde outpost in Ashenvale, lying just North-West of Felfire Hill. Like most Horde outposts, Splintertree is mainly populated by orcs and tauren, all whom are primarily scouts and guards. There are several quest givers, a heavy armor vendor for repairs, an inn, mailbox, stable master, and a flight path maintained by wind rider flight master Vhulgra.

Due to its location nearby the Warsong Lumber Camp, it is possible that Splintertree was once established and occupied by Grom Hellscream's Warsong troops during the Third War when the orcs first ventured into Ashenvale. The night elves, still on uneven ground with the past actions of the Warsong leader and with the strain on the Horde/Alliance Peace agreements from the last war, Splintertree is subject to a high amount of retaliation, especially since raids on Astranaar are frequent.

Splintertree appears to be under attack by the Alliance. Many of the NPCs located just outside the fortifications appear to have fled or been killed.[1]