For the mob found in Un'Goro Crater, see Stegodon (mob). 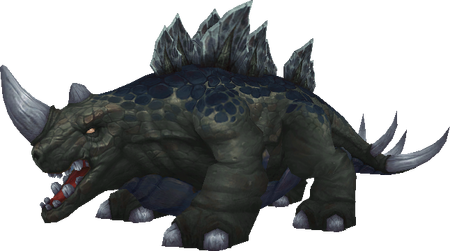 Stegodons are large primitive dinosaurs native to Terror Run in Un'Goro Crater. They come in a variety of names, colors, and abilities, and all of them are elite.

Stegodons are tamable by hunters as part of the Scalehide family, along with mushan, kodos and thunder lizards.

Several stegodons appear in the Journey to Un'Goro expansion for Hearthstone. Hearthstone's stegodons are characterised as being very noble, proud and protective of their young, making them a perfect fit for paladin.[1]

Stegodons are short-tempered, aggressive, but herbivorous dinosaurs. This massive reptilian creature heaves itself along on four legs the size of tree trunks. A stunted tail sticks out behind it and dark green spikes cover its body. An enormous tusk extends from its blunt snout. Easily irritated, they attack trespassers on sight, but rarely venture from their territories. They consume vast quantities of plant matter and grow angry when logging, mining, and other such activities disturb their food sources. A stegadon begins combat charging, and impaling its attacker. Vicious opponents, these dinosaurs gore and trample to debilitate enemies as swiftly as possible. Stegadons are stubborn creatures and often fight to the death.[2]