Titanstrike is in the tomb of Warlord Volund somewhere on the isle of Shield's Rest. It's a dank, sloppy mess adrift in a sea of gloom.

I've been workin' with a vrykul guide named Prustaga. She'll help us break the wards keepin' the tomb sealed.

I know what you're thinkin'... vrykul are trouble. But she hasn't taken a swing at me just yet.

Huey'll take us down to the shore. Prustaga's probably found the tomb by now!

You might feel a bit dizzy after going through that teleporter. The Broken Isles isn't exactly next door, after all.

Landing at Shield's Rest
Grif Wildheart says: Brann introduced me to Prustaga not long ago. That dwarf sure has a way with the words... he can even charm a vrykul!
Grif Wildheart says: Accordin' to ancient texts we translated back in the Explorer's League, Titanstrike focuses the power of storms into blasts of energy.
Grif Wildheart says: If that's true, it could do some serious damage to the Legion. S'pose we'll find out soon enough!
Grif summons his bear companion, Theodore.

Speaking with Grif
Bit of a bumpy ride, eh? Flyin' through these clouds ain't easy, even on as fine a gryphon as Huey.

I'm ready to get underway.

Grif Wildheart says: Seems Prust wants the Legion out of here as much as we do. Worked night and day to find this tomb!

Grif Wildheart says: Prustaga! Brought a friend to join us, as promised.
Prustaga says: I care nothing for friendship, soft-earthen. So long as this one helps us enter the tomb, I will tolerate the intrusion.
Grif Wildheart says: Hmm... looks like some fools plundered the tomb and stirred up all sorts o' spirits.
Warlord Volund says: Defiler... no... not yours...
Warlord Volund says: Thief! Coveter! It belongs to me!
Grif Wildheart yells: Pipe down! We're after yer gun for a good cause, ghostie!
Prustaga says: Enough chatter. Move!

Find the entrance to the tomb of Warlord Volund inside the Tomb of Ancient Kings.

Entering the Tomb of the Old Kings
Warlord Volund says: My chosen will protect me for all eternity!

Upon defeat
Stormweaver Ingrida says: My warlord... we have... guests...

After her defeat, the storms freeze temporarily and allow Grif and Prustaga to progress up to you. In the second half of the wall, heavy winds are blowing against you and tornadoes are summoned by Spectral Windshapers. The doors on the left and right of the hall have flags telling the story of the kings lying in their tombs.

Upon reaching the end of the hallway

A door with runes is on the right side of the hall.

Second rune dispelled and the two spirits defeated
Prustaga says: They grow in strength. Be ready!

Stage 4 - Every Nook and Cranny

A discharge of electricity links the mechagnome and the nearby Automated Crushers and Ancient Mechano-Tanks.

Prustaga says: They're coming to life!

After defeating the robots

XR9-47 interacts with the device and Image of Mimiron appears.

Image of Mimiron says: Bronzebeard? Ah yes, there you are! My records show this unit has been inactive for millennia. It was stolen from my lab long ago.
Grif Wildheart says: For the last time, I'm not Brann!
Prustaga says: Where is Titanstrike, little tinkerer?

The Image of Mimiron climbs up the stairs to the platform.

Image of Mimiron says: The gun is there? Most curious! Telemetry coming in... the Broken Isles... vrykul tomb... Ah yes, I see it now!

Image of Mimiron says: Oh my stars! Yes, this is it! The lid is attuned to a particular frequency. I just need to transmit a signal like so, and...

Titanstrike appears on the teleportation pad.

Grif Wildheart says: There it is! Mission accomplished!

Volund's ghost appears on his throne.

Warlord Volund yells: Thieves! Your heads will decorate my throne!

Upon defeat
Warlord Volund says: You... cannot... control...
Grif Wildheart says: That wasn't so bad! Okay, <name>, grab Titanstrike so we can get out of here.
Prustaga says: You've played your part. Now I shall play mine!

Prustaga stuns everyone. She approaches the pad and takes Titanstrike.

Prustaga says: The heart of this weapon will infuse me with the might of the titans. The vrykul shall bow before me... their new god-queen!

Prustaga opens a portal and disappears.

Image of Mimiron says: Not good, not good at all! You should both join me in my workshop in Ulduar at once. We have a problem to solve!

Use the teleportation pad to join Mimiron in Ulduar 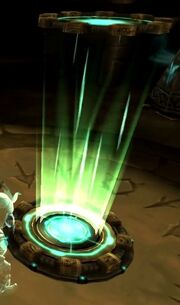 Image of Mimiron says: Oh this is fortunate! Titanstrike's power has energized this teleportation pad. I should be able to reroute its destination... Success!

Use the teleportation pad.

Walking through the Corridors of Ingenuity

Mimiron says: Excellent! You made it through in one piece! You can never be sure about reliability of stolen teleporters...
Mimiron says: I'm preparing the diagnostic systems now. Say, you had quite an epic struggle with that ghostly vrykul warlord. The thief had it coming, if you ask me!
Mimiron says: Steam pump... check. Low-ion energy converter units... check, check, and... check.

Approaching Mimiron at The Spark of Imagination
Mimiron says: There you are! Right on schedule.