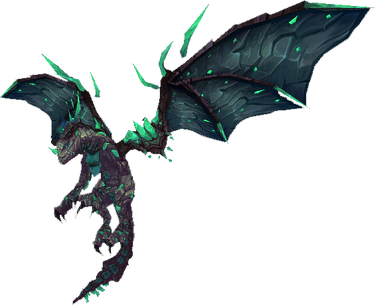 Stone drakes are dragonkin native to Deepholm. They look as if they are made of stone.

The mighty stone dragons are mysterious creatures that inhabit Deepholm, the elemental plane of earth. Their origin is unknown, as before the Shattering no one had seen them (or lived long enough to tell the story). Their draconic appearance, however, may not indicate their true nature. It appears they are quite tightly connected to the element of earth, although they are not aligned with Therazane. As stated by the Kor the Immovable, the stone dragons are fickle, and bend only to strength and the strongest of them is Aeosera, their broodmother.

When Deathwing arrived into Deepholm after suffering his defeat many years before the Shattering, he quickly gained control over the stone dragons.[1] They also seem to be non-sentient beings, as none of them so far can be seen using any kind of language, neither draconic nor kalimag, not even Terran. This may mean that they are in fact elementals similar to the phoenixes from the Firelands.

Brann Bronzebeard recently uncovered evidence, corroborated by reports from adventurers in Deepholm, that proto-dragons and dragons may have origins in these — and other — elemental drakes. The inhabitants of Deepholm, the Skywall, the Firelands, and the Abyssal Maw are less than talkative on these matters, however, and most of them were not around when the elemental prisons were created.[2]

The Stonemother has shown little concern for the rebellious Aeonaxx, even allowing his spawn to be taken from her realm.[3]

After the alliance with Deathwing, Aeosera has been put back in her place and it is Therazane's responsibility to protect her. Therazane sent an Earthen Ring shaman and elementals to carry Aeosera's eggs to safety in the midst of a trogg attack.[4]