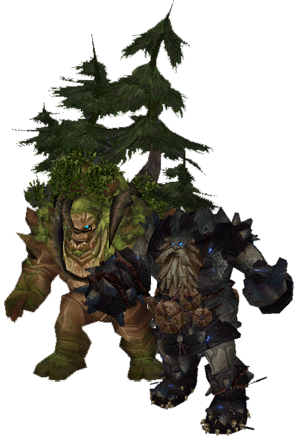 The term stone giant refers to two or more different, yet possibly interconnected titan creations. All are, of course, giants made of stone.

Stone giants were listed as one of the five types of titan-made giants,[1] and so may be a single race that includes all other types of stone-based giants, such as mountain giants and colossi.

In ancient times, they were led by the keepers to make war on the Old Gods and free Azeroth from their will.[2]

Stone giants[3] (also called wood giants[4]) are found primarily in Northrend. They look like mountain giants with trees sticking out of their backs, and roots wrapped around their heads. These stone giants look more like a type of colossus. Some of the stone giants are rune-inscribed, the runes control the giants.[3][5]

Based on his quotes and his association with Kurun, Gavrock (a colossus) may be one, but without the trees.

Also, the Grizzly Hills Giants who work with Kurun may be the same type of creature, even though they are mountain giants.[6]

Some of Northrend's stone giants (possibly called rock-giants[7]) are more detailed appearing more human-like with carved beards, and armor. One of their hands seems to have been replaced with a spiked boulder. These seem the most similar to the other four types of titan-made giant, but rather dissimilar to other "stone giants."