Stonetalon Peak is an Alliance settlement at the far northwestern end of the Stonetalon Mountains. It is built within a verdant mountain valley and is maintained by the druids of the nearby Talon Den. Stonetalon Peak has recently been destroyed by invading tendrils. The area is now inhabited with Corrupted Sentinels. Brother Ravenoak has woken up, and appears to have been corrupted by the tendrils.

Local cultures consider the mountain sacred. It is suffused by magic.[1]

The area used to be a temple of Queen Azshara.[2]

During the Third War, Jaina Proudmoore and her expedition arrived here and established a base near the entrance to the Stonetalon Peak caverns. Later, Thrall and his Horde came here as well in search of the Oracle.

The ruins of Stonetalon Peak, before the Cataclysm.

It has since became a hub for the night elves and the Alliance.

After the Cataclysm, the area was invaded by enemies.

Flight paths before the Cataclysm

This forested peak is a glimpse at what the entire Stonetalon Mountains looked like before the goblins and elementals arrived. Here, one can find the only Alliance outpost, led by a night elf named Albagorn. The night elves take shelter on Stonetalon Peak, maintaining that refuge with the help of their allies. The elves here are assisted in their efforts to reclaim the mountains by dryads and mighty keepers of the grove. A barrow den is also located here, where some druids lie sleeping, connecting to the Emerald Dream.[3]

This peak is the highest point in the Stonetalon Mountians and was actually made hollow with numerous eruptions in the Great Sundering. The caves have become home to several wayward beasts, which gain entrance through an opening in the south. The Horde knows of their leader Thrall's passage through the legendary caves, but he explored only one of the many twisting routes of empty lava tubes that fill Stonetalon Peak.[4] 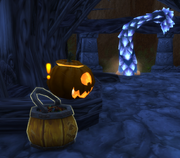