“Legends maintain that the benevolent titans monitored Azeroth from the Storm Peaks in the years following their reshaping of the world. It is further believed that the secrets of Azertoh's past, present, and future may be found in the time-lost ruins of Ulduar.”

The Storm Peaks are a mountain range and region located in the northeast of Northrend. The winds that rip through the mountains are extremely violent and dangerous. Due to high winds and avalanches, the Sons of Hodir recommend bringing at least two companions if venturing into the dangerous Storm Peaks.[1]

It was in the Storm Peaks that a titanic battle occurred between Aegwynn, then the Guardian of Tirisfal, and Sargeras's avatar, the Lord of the Burning Legion.[citation needed]

The Temple of Storms, home of the titan watcher Thorim, is located on this peaks. The third known titan city of Ulduar is also located here.

The North Wind was once the elemental ruler of the Storm Peaks, crushing the land and its denizens, including the tribes of the taunka, in its iron grip. Seeking to end the North Wind's domination of his people, the taunka hero Stormhoof, brother of Chieftain Swiftspear of Camp Tunka'lo, did battle against the North Wind in the Plain of Echoes and weakened it, but did not manage to defeat it before he fell.[2][3] Biding its time as it regained strength, the North Wind plotted an insidious revenge against both Stormhoof and his people: it would erase the hero from history, altering the timeline and ensure its continued domination of the Storm Peaks. It changed the recorded history of Tunka'lo, portraying Stormhoof as a servile insurrectionist executed for his "crimes", rather than the hero who had liberated his people.[3]

Regions adjacent to the Storm Peaks 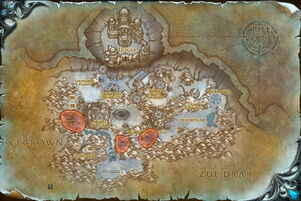 Time-Lost Proto Drake is known to live in the Storm Peaks.[1] Rare Elite NPCs associated with the

From the name, you would think the Storm Peaks are mountains but that is not entirely accurate, though they have the highest elevation of any region in Northrend. However, they are not mountains, they are cliffs. The "peaks" are the spots where wind has not cut away the ice and rock, as opposed to the narrow paths it has carved. Through large parts of this region you can literally leap from peak to peak, provided the wind does not throw you over the edge.

Ulduar, like much of Northrend, is sparsely inhabited. The giants stay hidden, their golems don't bother you unless you approach the giants' homes, and the magnataur and wendigo are infrequent and large enough to spot from a distance. It is a good place to be alone with your thoughts if you don't mind the biting wind, the searing cold, and the repetitive stretches of ice and rock.[4]

The Storm Peaks have treacherous paths, powerful winds, jagged cliffs and hungry monsters. They are also home to the storm giants, one of the oldest races in the world and the keepers of the Titans' legacy.[5]

Long ago the Titans lived here. They created Ulduar as their city, and from there they worked their experiments. The storm giants began here, and perhaps the dwarves and troggs as well. Then the Titans disappeared, leaving the races to survive on their own. The dwarves moved south, into warmer climates, but the storm giants remained and claimed Ulduar. They developed crystalline golems to aid them in their research and to defend them. Over time the giants have dwindled in number and grown ever more reclusive. Now only a handful remains.[5]

When the Lich King and the Scourge invaded Northrend, the storm giants, who might have been strong enough to stop him, hid away in the Storm Peaks and avoided all contact.[6]

During one of the frequent storms, a lightning shattered a small peak, revealing a cave hidden within. Some explorers saw that the cave walls had clearly been fashioned by an artisan, and resembled a strangely organic city or house. One of them brought word back to Valgarde and created a stir. They speculated if the cave could have been a Titan home and wondered what secrets remain hidden there. A group of heroes decided to mount an expedition and explore the cave before the storm giants could find it and claim it.[5]

The storm giants make their home here. They are impressive, more than 30 feet tall and powerfully built and they can even summon small storms. They normally keep to themselves, hidden in their caves and tunnels below the surface, and avoid visitors. The giants like their privacy, and their crystalline golems help maintaining it. The same golems can be found down in Crystalsong Forest, gathering crystals to bring back here. There they are servants and couriers but here they function as door wardens and bodyguards, making sure no intruder gains entrance to the giants' lairs.

Magnataur and wendigo roam the peaks, fortunately they are solitary, and easy to spot.[4]

On the edge of the peaks you can look out over Icecrown Glacier to the west, Crystalsong Forest to the south, Zul'Drak to the southeast, and the ocean to the north.[4]

The two biggest dangers in the Storm Peaks are not necessarily its inhabitants. The wind is fierce and constant, and can easily tug a grown dwarf off a cliff. One look at those paths it has cut through them and you realize how deadly wind can be.

The second danger is sunlight. That might sound strange but the peaks are covered in ice and the light reflects from every angle. Icecrown Glacier has the same effect, but the ice there is composed of flat sheets so you can't look down easily. Up here the ice is everywhere. Wearing dark glasses is the only way to survive — otherwise you are blinded every time you move your head, and before long you step wrong and tumble off a cliff or down a ravine. The weather doesn't help — it is either clear and sunny, with that nasty glare, or dark as night and pouring, with sheets of freezing rain, hail or snow battering you and making every surface as slick as oil.

The peaks are handsome in an austere way. Little grows here — a random bush sprouting in a nook along a cliff face, a few tough blades of grass in a crack. Everything else is stone and ice. Animals appear to be rare, so what the wendigo and magnataur eat to survive is a mystery. Probably each other and any travelers they can find perhaps.

No one lives here except the storm giants, their golems, and beasts like the wendigo and magnataur. The latter have caves they have found or dug into the ice and rock. The giants have their city, Ulduar, and the Temple of Storms.[4]