Stormwind Stockade, aka the Stormwind Stockades[1] and The Stockade, is a high-security prison complex, hidden beneath the canal district of Stormwind City. Presided over by Warden Thelwater, the Stockade is home to petty crooks, political insurgents, murderers and a score of the most dangerous criminals in the land.[2] A large number of dangerous criminals, including some criminal masterminds and Defias mercenaries, are currently being held in the stockade. The stockade allowed visitors for the prisoners.[3] However, not so long ago, there was a revolt inside the dungeon, and the prisoners now keep the Stockade under their control.

Recommended group composition is a competent and reasonably balanced group of players around level 27, with a decent level 27, at least, tank or very competent players for the final mini-boss.

Stormwind Stockade is a closely guarded prison built beneath the canals of Stormwind City. Warden Thelwater keeps watch over the stockade and the highly dangerous criminals who call it home. Recently, the inmates revolted, overthrowing their guards and plunging the prison into a state of pandemonium.

The Stockade is a high-security prison complex, hidden beneath the canal district of Stormwind City. Presided over by Warden Thelwater, the Stockade is home to petty crooks, political insurgents, murderers, and a score of the most dangerous criminals in the land. Recently, a prisoner-led revolt has resulted in a state of pandemonium within the Stockades - where the guards have been overthrown and the convicts roam free.

Mac was a 14-year-old boy who volunteered to serve as a guard in the Stockade when the Stormwind Army was sent off to the front. Mac reprimanded some of the prisoners for tearing their wool blankets to make scarves, a symbol of their gang. For that, Mac was stabbed in the back and killed.[4]

Warden Thelwater has managed to defend himself, and is currently enlisting brave thrill-seekers to venture into the prison and put down the uprising, thought to have been instigated by some new prisoners - the terrifying menace known only as "Hogger" and his violent Riverpaw pack of gnolls.[5]

During the Cataclysm, non-violent criminals were sent from the Stockades to the Barrens as a penal legion under the Northwatch Expeditionary Unit. Some of them looted Camp Taurajo against their orders.[6]

During the Battle for Lordaeron, Anduin Wrynn captured Horde general Varok Saurfang and ordered him imprisoned within the Stockades.[7] Horde forces sent by Sylvanas Windrunner later infiltrated the Stockades to free Princess Talanji and Zul of the Zandalari. They also tried to release Saurfang, but he refused to go with them.[8] Saurfang later escaped via the sewer system, emerging in Elwynn Forest and heading to the Swamp of Sorrows via Redridge Mountains. Along the way his escape was aided by Master Mathias Shaw of SI:7, who told guards to take the night off thus allowing Saurfang to sneak by, but it is unknown if Saurfang knew he had help or not.[9]

During the course of the war, Captain Zalkran was captured and sent to the Stockade.

Anduin Wrynn personally watched the procession of apothecary Cotley into the stockades where he ordered for the Forsaken to be treated fairly and due to be set free after being thoroughly questioned.[10]

After Sira Moonwarden was captured by the Horde, she was transferred to Alliance custody as the beginning payment of what was owed by the Horde to Tyrande Whisperwind. Sira was subsequently sent to the Stockade. From Nordrassil, a kaldorei mage teleported Tyrande, Shandris Feathermoon, and Maiev Shadowsong into the Stockades who then met with Sira.[11]

Stormwind Stockade is located inside of Stormwind City, on the northernmost section of the canal surrounding the Mage Quarter, the building is marked with a meeting stone directly next to its doorway, the actual entrance into the instance is directly inside the building, down the small, open set of stairs.

For Alliance characters, the Stockade is without a doubt the easiest instance to simply walk in to, being in what is arguably the most popular of the Alliance cities. For Horde, this is a different story, and if one wishes to enter the instance in a manner besides queuing for it at the correct level, it will take some work.

One popular way for Horde characters to enter the Stockade is to gain access to the port on the eastern side of the city. This can be done by swimming or using waterwalking abilities (

[Path of Frost] or an

[Elixir of Water Walking], for example) to swim to the port from Westfall. Once in the port, one can make their way through the canals to the instance. 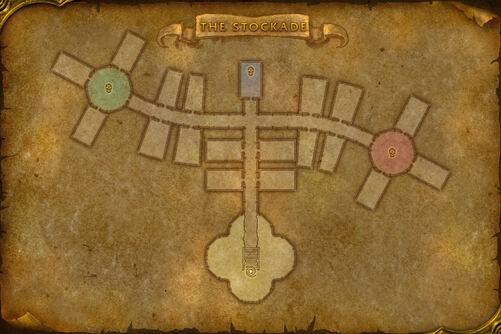